General Motors reported adjusted earnings of $2.25 per share for first-quarter 2021, breezing past the Zacks Consensus Estimate of $1.02. The bottom line was also significantly higher than the year-ago earnings of 62 cents per share amid cost-containment efforts, and robust demand for SUVs as well as pickups. However, revenues of $32,474 million missed the Zacks Consensus Estimate of $33,260 million. Revenues also slipped from the year-ago figure of $32,709 million. The company expects 2021 adjusted EBIT and EPS per share in the band of $10-$11 billion and $4.5-$5.25, respectively. Adjusted automotive FCF is envisioned between $1 billion and $2 billion. (General Motors Q1 Earnings Top Estimates, Revenues Lag)

Cummins reported first-quarter 2021 earnings of $4.04 per share, surpassing the Zacks Consensus Estimate of $3.46. The bottom line, moreover, compared favorably with first-quarter 2020 earnings of $3.18 a share. Cummins’ revenues increased 22% year over year to $6,092 million. The reported figure also handily beat the Zacks Consensus Estimate of $5,303 million. It projects full-year 2021 revenues to be up 20-24% and EBITDA within 15.5-16% of sales, up from the previous guided range of 8-12% and 15-15.5%, respectively. In fact, the company anticipates returning 75% of operating cash flow to shareholders in the form of dividends and share repurchases in 2021. (Cummins’ Q1 Earnings & Sales Beat Estimates, '21 View Up)

Ford ramped up its spending in electric vehicle (EV) battery startup Solid Power, as the U.S. auto giant aims to deploy next-gen batteries into its green cars by 2030-end. Notably, Ford and BMW AG led the $130-million funding round of Solid Power. Per the pact, the two auto biggies would secure automotive batteries from Solid Power, which could be tested and integrated into the firms’ EVs beginning next year. Ford currently carries a Zacks Rank #3 (Hold). You can see the complete list of today’s Zacks #1 Rank stocks here.

Tesla (TSLA - Free Report) yet again lifted prices of Model 3 and Y SUVs, which marks its fourth price rise in the past two months. The Standard Range Plus and the Long Range AWD variants of Model 3 are now available at $40,690 and $49,690, respectively. However, the Model 3 Performance’s price remains unchanged at $58,190. While the company did not jack up prices of the Model Y Performance, the EV behemoth raised the price of Model Y Long Range AWD by $500 to $52,690. 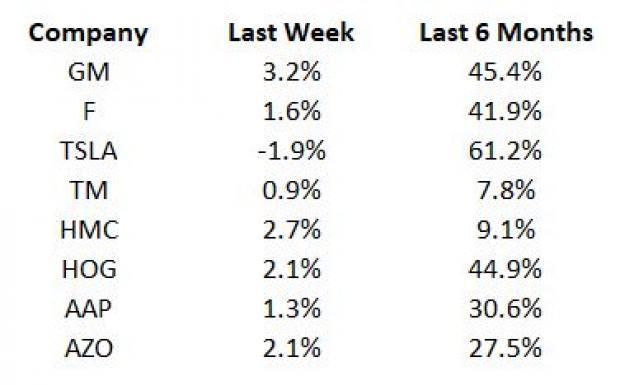 Industry watchers will track China vehicle sales data for April 2021, which is likely to be released by China Association of Automobile Manufacturers later this week. Investors in the auto sector would be closely tracking the quarterly reports of Japan auto bigwigs Honda and Toyota that are scheduled to report results during the week. Also, watch out for updates on how automakers will tackle the semiconductor shortage and make resultant changes in business operations.