Barring one-time items, earnings were $3.27 a share, up from 26 cents per share a year ago. The figure topped the Zacks Consensus Estimate of $2.42.

Revenues climbed around 28% year over year to $1,092.6 million in the quarter. The top line was driven by higher prices as well as increased sales volume in all segments barring Feedstocks.

Revenues at the Latex Binders segment rose 15% year over year to $251 million in the reported quarter due to the pass through of higher raw material costs and increased sales volumes.

Revenues at the Synthetic Rubber segment went up 22% year over year to $124 million, aided by higher volumes. The company witnessed continued demand recovery in the tire market.

Revenues at the Base Plastics unit went up 28% year over year to $329 million on higher volume in applications like construction, higher pricing and favorable currency swings.

Sales at the Polystyrene segment climbed 46% year over year to $267 million, due to the passthrough of higher styrene costs and higher sales volumes on increased demand for applications in appliances and consumer electronics.

The Americas Styrenics unit logged adjusted EBITDA of $23 million for the quarter, up around 134% year over year, driven by higher styrene volume and margin in North America.

The company recorded cash flow from operating activities of $51 million for the reported quarter.

The company expects results for the second quarter to be similar on a sequential comparison basis due to the continuation of similar market trends that include strong demand and margins across many of its segments.

Trinseo’s shares have surged 261.1% over a year, outperforming the industry's rise of 148%. 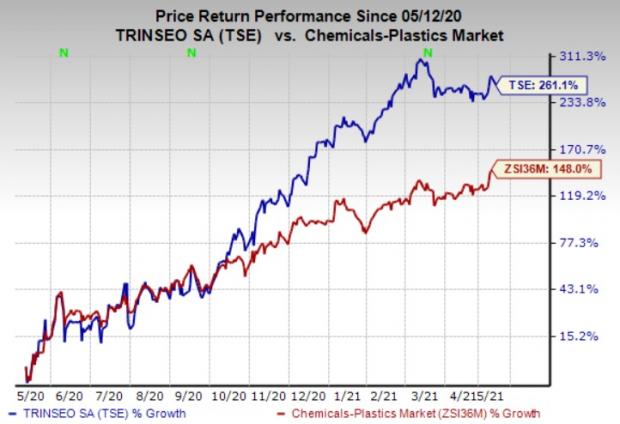 Nucor has a projected earnings growth rate of 228.4% for the current year. The company’s shares have rallied around 159% in a year. It currently sports a Zacks Rank #1 (Strong Buy). You can see the complete list of today’s Zacks #1 Rank stocks here.

Dow has a projected earnings growth rate of 261.5% for the current year. The company’s shares have shot up around 103% in a year. It currently sports a Zacks Rank #1.

Impala Platinum has an expected earnings growth rate of 197.6% for the current fiscal. The company’s shares have surged around 230% in the past year. It currently carries a Zacks Rank #1.