Biohaven Pharmaceutical (BHVN - Free Report) incurred loss of $4.27 per share in first-quarter 2021, wider than the Zacks Consensus Estimate of a loss of $2.92 as well as the year-ago loss of $3.07. Adjusted loss for the first quarter was $3.04 per share compared with $2.39 in the year-ago period. The dismal bottom-line performance was due to higher operating expense during the quarter.

Total revenues, solely from Nurtec ODT, were $43.8 million in the first quarter, up almost 24.8% sequentially. Revenues were in line with the Zacks Consensus Estimate. The company recorded revenues of $1.2 million in the year-ago quarter. Please note that, the company had launched Nurtec ODT in March 2020.

Shares of Biohaven were down almost 2.9% on May 10, following the earnings release. In fact, the stock has declined 19.1% so far this year compared with the industry’s decrease of 5.1%. 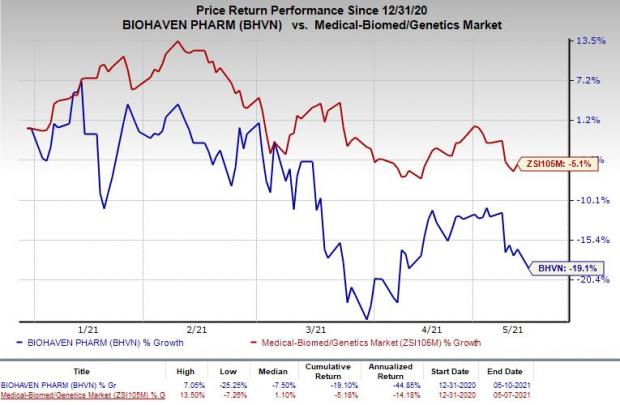 Research and development (R&D) expenses, including stock-based compensation, were $107.1 million in the quarter, up 91% year over year driven by higher clinical activities relate to a key pipeline candidate, zavegepant and one-time license and milestone payments.

Selling, general and administrative (SG&A) expenses were $159.5 million in the quarter, up 66.8% compared from the year-ago period. The significant increase in SG&A expense was driven by higher costs to support the commercial launch of Nurtec.

As of Mar 31, 2021, Biohaven had cash and restricted cash worth $575.5 million compared with $357.4 million as of Dec 31, 2020. The increase was driven by proceeds from sales of common shares and receipt of a milestone payment.

Biohaven stated that its oral anti-CGRP drug, Nurtec ODT, has demonstrated strong uptake since its launch in March 2020. Sales of the drug increased during the first quarter despite COVID-19 related disruptions. The drug’s sales were driven by growth in oral CGRP segment as well as increase in market-share of Nurtec ODT as migraine therapy.

Biohaven is developing Nurtec ODT (rimegepant) as a potential preventive treatment for migraine. The company’s supplemental new drug application (sNDA) seeking approval for this indication is under review with the FDA and a decision is expected later in the second quarter. A regulatory application seeking approval for rimegepant as potential acute as well as preventive treatment for migraine is under review in Europe. The company’s planned commercial name for rimegepant in Europe is Vydura.

Apart from Nurtec, the company is also developing three other pipeline candidates, verdiperstat, troriluzole and zavegepant.

A phase III study evaluating verdiperstat as a potential treatment for multiple system atrophy (“MSA”) is ongoing. Top-line data from the MSA study is expected in the third quarter of 2021. The candidate is also being evaluated as a potential treatment for amyotrophic lateral sclerosis (“ALS”) in a clinical study being conducted at Massachusetts General Hospital by Healey Center. Biohaven expects to complete enrollment in ALS study in the fourth quarter of 2021.

A phase III study is evaluating intranasal zavegepant as acute treatment of migraine. Top-line data from the study is expected in the second half of 2021. In March, the company started enrollment in a phase II/III study to evaluate an oral formulation of the candidate as preventive treatment of migraine. The company is also developing an oral formulation of the candidate in an early-stage study.