Axsome currently does not have any approved product in its portfolio. As a result, the company is yet to generate revenues from the same.

Despite narrower-than-expected loss in the first quarter, shares of Axsome were down 2.5% on May 10, presumably tracking the decline in the broader S&P 500.In fact, Axsome’s stock has declined 31.9% so far this year compared with the industry’s decrease of 5.2%. 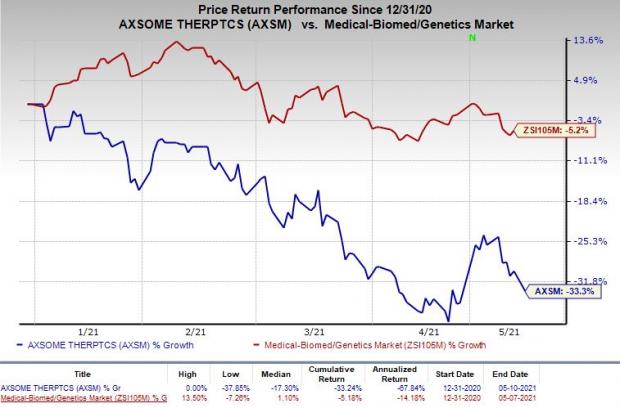 Research and development (R&D) expenses were $16.6 million in the quarter, down 39.6% from the year-ago period owing to completion of several studies on the pipeline candidates.

General and administrative (G&A) expenses were $11.2 million, up 124% year over year. The significant increase was due to higher pre-commercialization activities to support the anticipated launch of AXS-05 in the second half as well as increased stock compensation expenses and personnel costs.

As of Mar 31 2021, Axsome had cash worth $164.7 million compared with $183.9 million as of Dec 31, 2020. Management believes that its cash balance as of March-end along with $225 million worth term-loan facility will be enough to fund its anticipated operations for at least through 2024.

AXS-05, one of Axsome’s lead candidates, is being developed for treating major depressive disorder (“MDD”), treatment-resistant depression (“TRD”), smoking cessation and agitation associated with Alzheimer's disease (“AD”). During the first quarter, the FDA accepted the company’s new drug application seeking approval for AXS-05 as a potential treatment of MDD. A decision is expected by Aug 22, 2021. The company is making preparations to launch AXS-05, following a potential FDA approval.

The company is currently enrolling patients in the phase III ACCORD study, evaluating the safety and efficacy of AXS-05 for treating agitation associated with AD. The company has successfully completed a phase II/III study — ADVANCE-1 — evaluating AXS-05 for AD agitation last month.

Meanwhile, a meeting with the FDA is scheduled in the third quarter to discuss data from the previously completed phase II study and future course of development in smoking cessation indication. Meanwhile, top-line data from a phase II study evaluating AXS-05 for TRD is expected in the second half of 2021.

This apart, Axsome’s AXS-12 is being developed to treat narcolepsy, a sleep disorder characterized by excessive sleepiness. A placebo-controlled, parallel-group phase III study AXS-12 for the given indication is expected to begin in the third quarter of 2021, which was previously anticipated to start in the second quarter.

Axsome reported narrower-than-expected loss in the first quarter. Meanwhile, a potential launch of AXS-05 as a treatment for MDD is the most anticipated event for the company in 2021. The company will have its first commercial product following a potential FDA approval in August. It will likely be a major boost for Axsome as it will help the company to have a steady stream of revenues going forward.

Moreover, the company is progressing well with multiple other late-stage candidates. Investors may witness several NDA filings over the next few quarters, which, if approved, will boost the company’s prospects.