MAXIMUS, Inc. (MMS - Free Report) reported better-than-expected second-quarter fiscal 2021 results. However, strong results failed to impress the market as the stock has plunged 3.9% since earnings release on May 6.

Earnings per share (EPS) in the second quarter amounted to $1.29, which surpassed the Zacks Consensus Estimate by 57.3% and surged more than 100% year over year. The bottom line was primarily driven by surge in operating income.

Revenues of $959.3 million beat the consensus mark by 15.7% and increased 17.3% year over year. The uptick was driven by new COVID-19 response work such as vaccination distribution support services, unemployment insurance program support, disease investigation, contact tracing and other key initiatives.

Shares of MAXIMUS have gained 37.6% in the past year compared with 29% growth of the industry it belongs to. 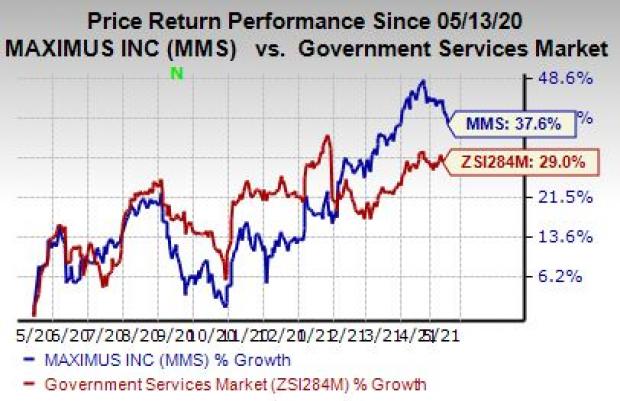 U.S. Services segment revenues of $448.2 million increased 45% (all organic) year over year, mainly owing to new work. The uptick was primarily driven by an estimated $175 million of COVID-response work.

U.S. Federal Services segment revenues of $330.1 million plunged 16.1% from the year-ago quarter’s reported figure. The downtick was due to decline in census contract revenues.

Outside the U.S. segment, revenues of $180.9 million increased 55.9% year over year on a reported basis. This segment realized growth driven by efficient operations in Australia, where market conditions continued to create and sustain job opportunities.

This Zacks Rank #3 (Hold) company ended the quarter with cash and cash equivalents of $101.7 million compared with $132.6 million in the prior quarter. The company generated $181.6 million of cash from operations. Free cash flow is $167.1 million. MAXIMUS paid out dividends of $17.2 million.

For the second consecutive quarter, Maximus is increasing revenues, earnings and cash flow guidance for fiscal 2021 due to recent awards, scope increases as well as contract extensions related to COVID-19 response work.