Ericsson (ERIC - Free Report) has inked an agreement with rival firm Nokia Corporation (NOK - Free Report) to settle a damages claim against it. The settlement charges to the tune of €80 million will be reflected in the company’s second-quarter results as well as in the forthcoming quarters and are likely to affect the bottom line and cash flow.

The contentious issue pertains to certain violations of the U.S. Foreign Corrupt Practices Act (FCPA) in five countries and a bribery charge in Djibouti, under which Ericsson had reached a resolution in 2019 by agreeing to pay total penalties of more than $1 billion. Notably, the U.S. Department of Justice (“DOJ”) and the Securities and Exchange Commission (“SEC”) conducted separate investigations against Ericsson, with the former pursuing criminal charges and the latter civil charges related to violations of the FCPA. The charges, pertaining to a period spanning 2000-2016, relate to offering bribes, falsifying books and records through sophisticated schemes and failing to implement reasonable internal accounting controls to safeguard the ethical business policies of the company.

The settlement charges included a $520 million penalty imposed by the DOJ and about $540 million by the SEC. In addition, Ericsson agreed to enter into a Deferred Prosecution Agreement (DPA) with the DOJ to put an end to the criminal charges pertaining to violation of bribery provision of the FCPA in Djibouti and accounting provisions in China, Djibouti, Indonesia, Kuwait, and Vietnam. As part of the DPA, an Egyptian subsidiary of the company pleaded guilty to a conspiracy charge. The SEC settlement resolved FCPA’s accounting provision violations in China, Djibouti, Indonesia, Kuwait, Saudi Arabia and Vietnam and bribery provisions in Djibouti, China and Saudi Arabia.

The current settlement agreement with Nokia is based on the premise that the potentially lengthy and complex litigation process involved uncertainty, risk, expense and potential distraction from business focus. The settlement charge will hit the second-quarter EBIT by €80 million and cash flow by €26 million. Ericsson will record the remainder of the charges under cash flow in 2022 and 2023 as it aims to follow a zero-tolerance policy for corruption and build a culture of compliance.

Ericsson is focusing on 5G system development and has undertaken many notable endeavors to position itself for market leadership on 5G. The company believes that standardization of 5G is the cornerstone for digitization of industries and broadband. Ericsson foresees mainstream 4G offerings to give way to 5G technology in the future. The deployment of 5G networks is expected to boost the adoption of IoT devices with technologies like network slicing gaining more prominence.

With the emergence of the smartphone market and subsequent usage of mobile broadband, user demand for coverage speed and quality has increased in the recent times. Further, to maintain superior performance as traffic increases, there is also a continuous need for network tuning and optimization. Ericsson is much in demand among operators to expand network coverage and upgrade networks for higher speed and capacity. It is reportedly the world’s largest supplier of LTE technology with a significant market share and has established a large number of LTE networks worldwide. Ericsson currently has 136 commercial 5G agreements with communications service providers (of which 78 are publicly announced) and includes 85 live 5G networks in 42 countries. 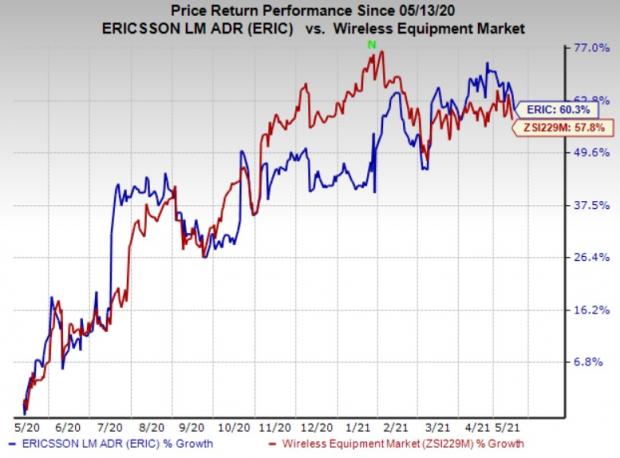 Viasat has a long-term earnings growth expectation of 24%. It delivered an earnings surprise of 190.9%, on average, in the trailing four quarters.