Barring minor hiccups, the U.S. telecom stocks have witnessed an uptrend on average over the past five trading days buoyed by administrative efforts to set guardrails and legislation to safeguard the interests of domestic firms and provide confidence to the industry. Federal agencies are further aiming to devise a proactive strategy to help build a secure and resilient supply chain mechanism to avert potential chip crisis in the industry. The efforts find resonance with President Biden’s plan to ensure digital inclusion for all Americans and bridge the digital divide between urban and rural areas.

The FCC is seeking suggestions from various industry groups to deter a similar crisis in the telecom sector that have shrouded the automobile business owing to a shortage in the supply of chips. These building blocks form a critical element in essential telecommunication equipment as well as in broadband and cable industry. With key inputs from industry watchdogs, the FCC intends to develop a comprehensive strategy to address the supply-chain imbalance and tide over the coronavirus-induced adversities. Additionally, leading technology and telecom firms that are among the largest chip-consuming companies in the world, have joined forces to form a new lobbying group to press for government chip manufacturing subsidies. The group expects to secure substantial federal funds under the CHIPS for America Act to expand domestic chip production capacity.

Meanwhile, the Senate Homeland Security and Governmental Affairs Committee have passed a legislation that bans federal workers from downloading TikTok in U.S. government devices. Notably, the White House is seeking a ban on TikTok, WeChat and other Chinese apps that are allegedly being used as cyber espionage tools to gain access to sensitive American data. The NYSE has also rejected appeals by three telecom firms, namely China Mobile, China Telecom, and China Unicom to annul their delisting plans from the exchange. The firms were alleged to have close ties with the Chinese military and were deemed to be national security threats, forcing the NYSE to set the ball rolling for delisting them in 10 days. However, another China-based telecom firm Xiaomi has been taken off the U.S. government blacklist after the court prodded the administration to resolve the ongoing litigation owing to lack of any concrete evidence against its alleged ties with the communist nation’s military.

Regarding company-specific news, earnings, damage settlement and procurement of funds primarily took the center stage over the past five trading days.

Excluding non-recurring items, non-GAAP earnings in the quarter were $1.87 per share compared with $1.49 in the year-ago quarter. Also, the bottom line beat the Zacks Consensus Estimate by 25 cents. Quarterly net sales were record high at $1,773 million, up 7.1% year over year to due to higher demand in the Americas and the International business on early signs of post-pandemic revival. The top line exceeded the consensus estimate of $1,750 million.

Net income in the March quarter declined to $60 million or 69 cents per share from $71 million or 81 cents per share in the prior-year quarter due to higher interest and income tax expenses. The bottom line, however, beat the Zacks Consensus Estimate by 8 cents. Quarterly total operating revenues grew 6.2% year over year to $1,023 million, which reflects strength in postpaid and prepaid handset additions. The top line surpassed the consensus estimate of $985 million.

Non-GAAP net income came in at $11.7 million or 41 cents per share compared with $1.4 million or 5 cents per share in the year-ago quarter. The bottom line surpassed the Zacks Consensus Estimate by 8 cents. Quarterly revenues were a record $88.5 million compared with $60.4 million in the year-ago quarter. The growth was driven by solid demand for Point-to-Multi-Point, Point-to-Point and enterprise Wi-Fi solutions. Also, the top line surpassed the consensus estimate of $83 million.

4.    Ericsson (ERIC - Free Report) has inked an agreement with rival firm Nokia Corporation (NOK - Free Report) to settle a damages claim against it. The settlement charges to the tune of €80 million will be reflected in the company’s second-quarter results as well as in the forthcoming quarters and are likely to affect the bottom line and cash flow.

The settlement agreement with Nokia is based on the premise that the potentially lengthy and complex litigation process involved uncertainty, risk, expense and potential distraction from business focus. The settlement charge will hit the second-quarter EBIT by €80 million and cash flow by €26 million. Ericsson will record the remainder of the charges under cash flow in 2022 and 2023 as it aims to follow a zero-tolerance policy for corruption and build a culture of compliance.

5.     Corning Incorporated (GLW - Free Report) has secured a $45 million investment from Apple Inc. to augment the production capacity of its glass manufacturing facility in Harrodsburg, KY. In addition to strengthening the mutual business relationship, the funding is likely to boost the local economy through job additions while fostering the research and development initiatives of the company.

The investment is part of Apple’s Advanced Manufacturing Fund – a $5 billion fund which doles out money to foster technological innovations and other social initiatives, such as accelerating COVID-19 testing kit supplies. Incidentally, Corning has already secured $450 million funds under this program over the past four years to help contribute to the overall economic development of the region. 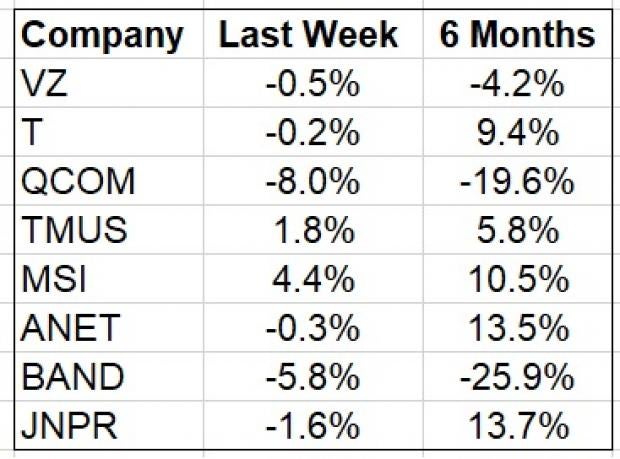 In the past five trading days, Motorola has been the best performer with its stock gaining 4.4%, while Qualcomm declined the most with its stock falling 8%.

Over the past six months, Juniper has been the best performer with its stock appreciating 13.7%, while Bandwidth declined the most with its stock falling 25.9%.

Over the past six months, the Zacks Telecommunications Services industry and the S&P 500 has gained 12.7% each. 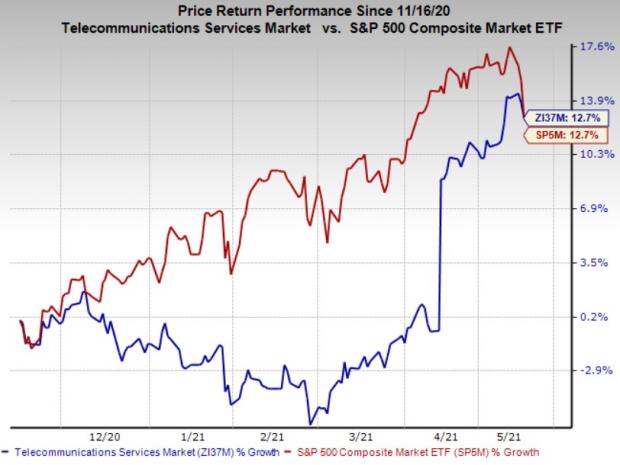 In addition to 5G deployments and product launches, all eyes will remain glued on how the administration implements key policy changes to safeguard the interests of the industry.