Why American Public's (APEI) Shares Dip 17% Over a Month

American Public Education, Inc. (APEI - Free Report) has tumbled almost 17% over a month compared with the Zacks Schools industry’s 9.8% fall and S&P 500’s 1.5% decline. In fact, its shares dipped more than 13% on May 11, after the company reported first-quarter 2021 results. In the last reported quarter, the top and bottom lines surpassed the Zacks Consensus Estimate, increased year over year and exceeded management’s respective guidance. However, its second-quarter projections impacted investors’ sentiments.

During the earnings call discussion, the company noted that the ongoing transition to ArmyIgniteED adversely affected Army enrollments after Mar 31, which will ultimately affect second-quarter results. 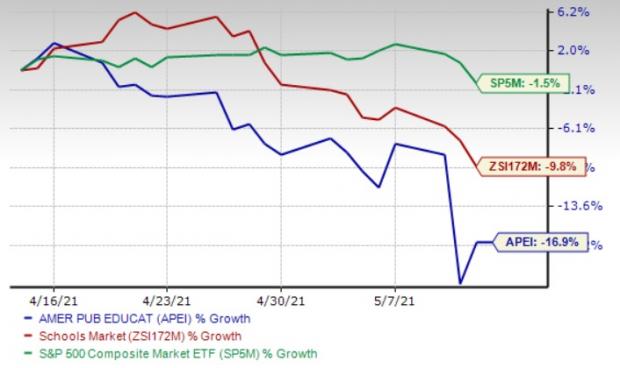 As pre-announced by the Army, the registration portal GoArmyEd went offline from Feb 11 to make way for the new portal ArmyIgniteED from Mar 8. However, the new portal came online but was taken down after a few hours due to technical challenges.

Active-duty Army soldiers are the company’s largest student segment and represent nearly one-quarter of total registrations in 2020. The Army's continuing challenges in activating its new registration portal resulted in significant fall in APUS registrations in April 2021. Although the portal is expected to restart in June, management is not sure when the new portal will be fully available.

Due to the above-mentioned headwinds, for the second quarter, it expects total net course registrations at APUS to decline 4-8% year over year. The company expects total revenues to fall 3-5% year over year. In the year-ago period, revenues grew 16.4% year over year. It anticipates the bottom line between a loss of 4 cents and an income of 3 cents per share, indicating a significant decline from the year-ago reported earnings figure of 45 cents. Adjusted earnings before interest, taxes, depreciation and amortization are anticipated within $7.3-$9.2 million.