Schwab’s active brokerage accounts totaled 31.9 million at the end of April, down marginally from the previous month but up significantly from the year-ago month. Further, clients’ banking accounts were 1.6 million, down 3% from March 2021 but up 9% from April 2020. The number of retirement plan participants was 2.1 million, up 1% sequentially and 25% year over year.

Schwab’s acquisitions (including the buyout of TD Ameritrade) have reinforced its position as a leading brokerage player and will be accretive to earnings. Further, by offering commission-free trading, the company has been able to witness a rise in client assets and brokerage accounts, which, in turn, is improving its market share.

So far this year, shares of the company have gained 38.1% compared with 32.1% growth recorded by the industry. 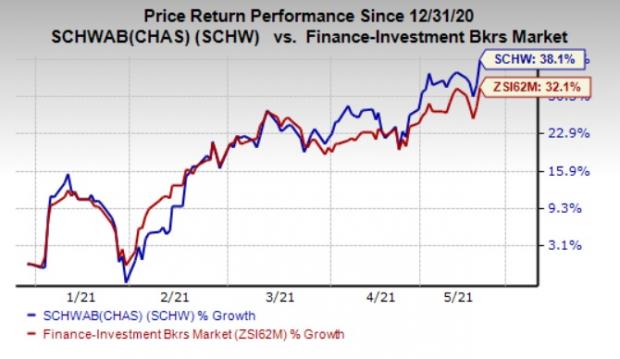 Interactive Brokers Group (IBKR - Free Report) released the Electronic Brokerage segment’s performance metrics for April 2021. The segment, which deals with the clearance and settlement of trades for individual and institutional clients globally, reported client Daily Average Revenue Trades (DARTs) of 2,181,000, jumping 27% from April 2020 but down 27% from March 2021.