TELUS Corporation (TU - Free Report) has recently announced plans to invest $16 million in 2021 in the lower St. Lawrence region in the province of Quebec, Canada, to boost network infrastructure. The strategic move will likely spur the economic development of the region, formed by eight regional county municipalities, with holistic growth across various sectors and help bridge the digital divide.

The company is planning to accelerate the deployment of PureFibre infrastructure and fast track the process of national 5G network rollout. Since 2013, the company has invested $300 million in the Quebec region for deployment of PureFibre network. Notably, TELUS currently offers PureFibre network across 93% of business enterprise and residential customers in markets that it serves and intends to increase that tally to 99% by the end of 2022 with government support.

By 2024, TELUS intends to invest $54 billion in Canada for upgrading the network infrastructure of the country for improved coverage and speed. This includes an investment of $9 billion in Quebec alone. The company has secured $26 million in grants from various provincial and federal governments under the Canada-Quebec Operation High Speed program for deploying high-speed Internet to nearly 5,000 households in the region. TELUS is initiating additional investments to connect 25,000 more households and businesses within the province to the PureFibre network by fall 2022.

Incidentally, TELUS has invested nearly $240 billion nationally over the past two decades for improving network infrastructure, operations and spectrum, including nearly $30 billion in Quebec. Leveraging these investments, TELUS anticipates reaching up to 225,000 additional rural and urban premises with its fiber technology, while enhancing the speed and coverage of its wireless network. This, in turn, is likely to result in the addition of incremental customers and improve its operational efficiencies by advancing its copper decommissioning plans. In addition, it is likely to augment the cash flow from 2023 onward due to reduction of capital expenditures by at least C$250 million owing to accelerated investments in 2021 and 2022.

The company plans to generate subscriber growth in key growth segments, including wireless, high-speed Internet and TELUS TV. Increasing demand for reliable access and fast-data services are expected to support customer addition. Furthermore, TELUS International and TELUS Health are likely to contribute to the company’s organic and inorganic growth as exemplified by the Lionbridge AI buyout. 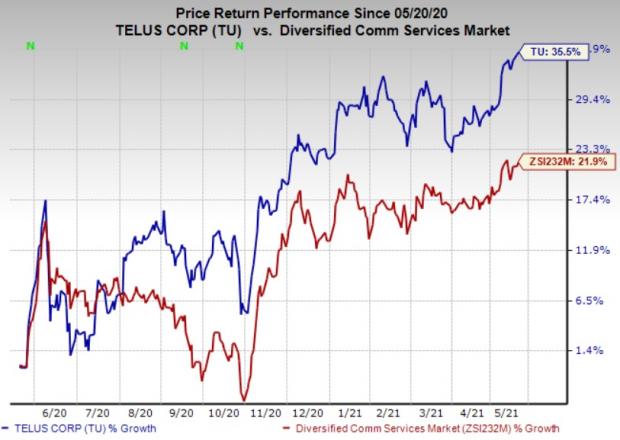 Viasat has a long-term earnings growth expectation of 24%. It delivered an earnings surprise of 190.9%, on average, in the trailing four quarters.

Nokia has a long-term earnings growth expectation of 1.5%. It delivered an earnings surprise of 215.2%, on average, in the trailing four quarters.