General Electric Company’s (GE - Free Report) unit, GE Renewable Energy, yesterday announced to have finalized contracts to supply Haliade-X wind turbines for the Dogger Bank wind farm. The financial terms of the contract were not disclosed by the parties involved.

In addition to the turbine supply, Renewable Energy will provide full services to the turbines for five years as per the terms of the Services and Warranty agreement.

Notably, Dogger Bank Wind Farm, situated on the northeast coast of England, will have a combined installed capacity of 3.6 GW of electricity. It will be developed in three phases (each with an installed capacity of 1.2 GW) and will be the biggest offshore wind farm upon completion in 2026. The first two phases — Dogger Bank A & Dogger Bank B — are joint ventures between Equinor ASA (EQNR - Free Report) , SSE Renewables and Eni S.p.A (E - Free Report) , with shares of 40%, 40% and 20%, respectively. Then again, both Equinor and SSE Renewables have a 50% share in Dogger Bank C.

As noted, Renewable Energy will engage in the designing, engineering and model testing of the turbines. Also, it will manufacture the turbines and supply them at the Tauernmoos plant. Supervision of the erection procedure and commissioning will also be done by Renewable Energy.

In April 2021, GE Renewable Energy secured a contract from CleanMax to supply 42 units of onshore wind turbines (2.7-132) at the latter’s onshore wind hybrid projects in India. Also, the company will provide related services to CleanMax for 10 years.

Also, in the same month, GE Renewable Energy secured a contract from Vietnam Join-Stock Construction Electricity Corporation to supply onshore wind turbines in Vietnam. This marks the company’s second such contract in the Binh Thuan Province of the country.

Renewable Energy provides offshore wind turbines, high-voltage equipment, blades for wind turbines (onshore and offshore), and other products and services. Its revenues in the first quarter of 2021 increased 1.7% year over year to $3,248 million. Organically, the segment’s sales were flat year over year, while orders increased 13%.

General Electric currently has a market capitalization of $115.4 billion and a Zacks Rank #3 (Hold). The company is poised to benefit from its healthy liquidity position, actions to restructure portfolio and solid contract wins. However, the market-related challenges in Aviation are worrying.

In the past three months, General Electric’s share price has gained 3.8% as compared with 9.5% growth recorded by the industry. 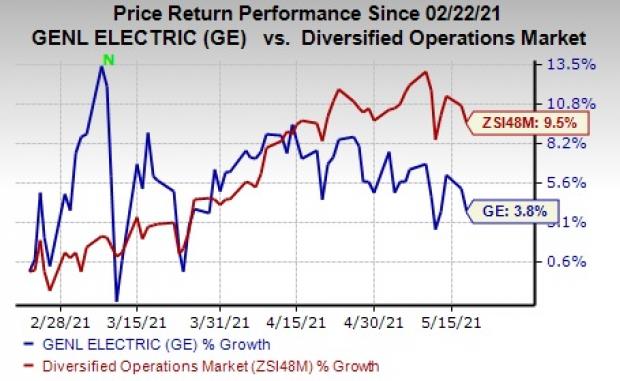 Also, earnings estimates are pegged at 4 cents for the second quarter of 2021, reflecting growth of 33.3% from the 30-day-ago figure.

In the past 30 days, Crane’s earnings estimates have improved for the current year. Also, its earnings surprise for the last reported quarter was 26.72%.