Exxon Mobil Corporation’s (XOM - Free Report) affiliate XTO Holdings, LLC recently closed the divestment of some producing oil and gas assets in Lea County to Empire Petroleum Corporation. The divested assets are located in the Eunice Monument Field of the prolific Permian Basin. The price tag of the divestment was more than $16 million.

The divested assets include about 700 wells and 40,000 net acres of land. Net production from the assets is expected to be 1,100 barrels of oil equivalent per day. Of the total, 67% is expected to be crude oil. Empire Petroleum, a Tulsa-based upstream company, also received associated gathering assets through the transaction.

The latest divestment is in line with ExxonMobil’s plan of streamlining its portfolio to increase profitability. In the first quarter, the company generated cash flow of $7.6 billion from operations and asset divestments. Last February, it agreed to divest a chunk of upstream assets in U.K. central and northern North Sea region to NEO Energy for more than $1 billion.

Divesting its non-core assets will enable it to focus on more profitable resources, including core Permian assets offshore Guyana and others. Markedly, it increased its guidance for Guyana production to 800,000 barrels per day (bpd) by 2025 from the previous projection of 750,000 bpd by 2026. Furthermore, production is expected to reach 1 million bpd by 2027. The company’s fourth deepwater project in Guyana is expected to boost output.

The stock has gained 30% in the past year compared with 25.4% rise of the industry it belongs to. 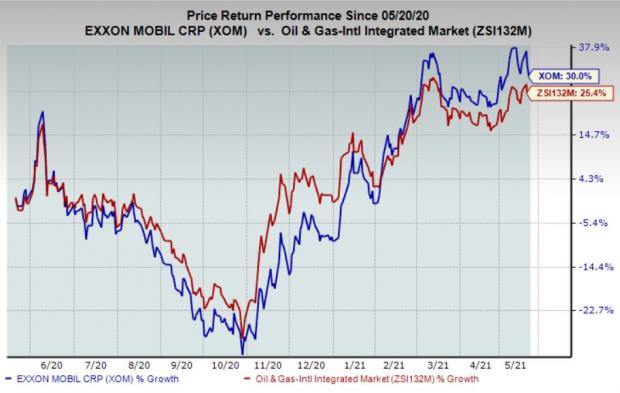 Suburban Propane’s bottom line for 2021 is expected to rise 58.8% year over year.

PHX Minerals’ bottom line for 2021 is expected to surge 40% year over year.