Apellis (APLS) Gets a Boost With FDA Approval of PNH Drug

Apellis Pharmaceuticals, Inc. (APLS - Free Report) received the FDA approval for its targeted C3 therapy, Empaveli (pegcetacoplan), as a monotherapy treatment for adult patients suffering from paroxysmal nocturnal hemoglobinuria (PNH), last week. This marks the first FDA nod to the company for any of its products, and should boost its top line in future quarters as it can generate revenues from the sale of the said drug upon successful commercialization.

Empaveli is approved for treatment-naïve patients as well as for patients switching from Alexion’s C5 inhibitor therapies for PNH — Soliris (eculizumab) and Ultomiris (ravulizumab).

The FDA approval was based on positive data from the head-to-head phase III study — PEGASUS — that compared Empaveli to Soliris, for improvement in hemoglobin levels in PNH patients. Data from the same showed that treatment with Empaveli led to an adjusted mean increase of 3.84 g/dL of hemoglobin compared with Soliris from baseline, over 16 weeks of treatment. Moreover, 85% of patients receiving Empaveli were free of transfusion over 16 weeks of treatment compared with 15% for Soliris.

Please note that Empaveli’s label also includes a box warning that it may increase the risk of meningococcal and other serious infections. As a result, the FDA has approved a risk evaluation and mitigation strategy (“REMS”) for Empaveli. The drug is now available only through a restricted program under a REMS.

Notably, a marketing authorization application seeking approval for Empaveli as treatment for PNH patients is under review in Europe. A potential approval is anticipated in the second half of 2021.

Shares of Apellis have plunged 15.7% so far this year compared with the industry’s decrease of 6.1%. 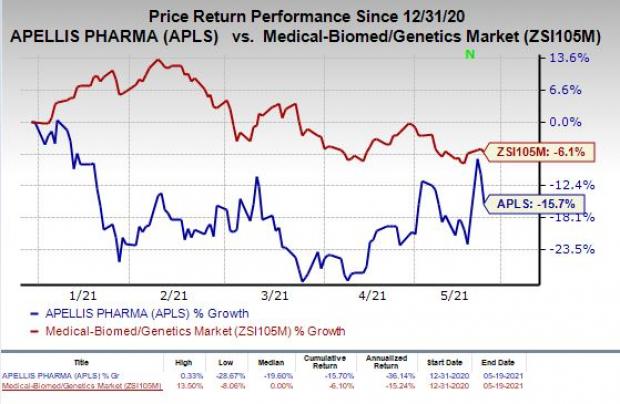 Apart from PNH, Apellis is developing Empaveli for systemic administration in several indications. Empaveli is being evaluated as a monotherapy in two phase III studies, namely, DERBY and OAKS, for treating patients with geographic atrophy. Top-line data from the same is expected in the third quarter of 2021.

Meanwhile, Empaveli is also being evaluated in the phase III PRINCE study in treatment-naive PNH patients. Top-line data from the same is expected in the second quarter of 2021.

We note that Empaveli has just been approved by the FDA and is yet to generate incremental revenues for the company. Meanwhile, Empaveli faces stiff competition from Soliris and Ultomiris, which are also approved for treating PNH. Also, Alnylam Pharmaceuticals (ALNY - Free Report) is conducting early clinical studies to develop cemdisiran, an RNAi therapeutic targeting C5. Nomacopan, a small protein C5 complement inhibitor, is being developed by Akari Therapeutics (AKTX - Free Report) in late-stage studies. Stiff competition in the target market will be a challenge for Apellis.

Intuit (INTU) to Report Q3 Earnings: What's in the Offing?