Coal has been sidelined as a fuel source due to rising awareness against emissions, and increasing usage of clean fuel sources like natural gas and other clean renewable energy as energy sources. However, the sudden rise in natural gas price has created a fresh opportunity for the Zacks Coal industry stocks. Per a current release from the U.S. Energy Information Administration (“EIA”), coal production in the United States in going to increase due to higher usage of the commodity in electricity generation.

So, the above prediction from EIA clearly indicates a change in the demand scenario for both thermal and metallurgical coal at least in the 2021-2022 time period. Coal companies that are fighting against drop in prices and demand will have to utilize their resources to meet the sudden change in demand for coal. It is evident that coal stocks will not only benefit from an increase in natural gas prices but also from higher demand from steel industries.

The 2021 Zacks Consensus Estimate for Peabody, CONSOL Energy and Ramaco Resources indicates a year-over -year increase of 89.9%, 572.9%, and 291.7%, respectively. All the stocks have outperformed the industry in the past six months. 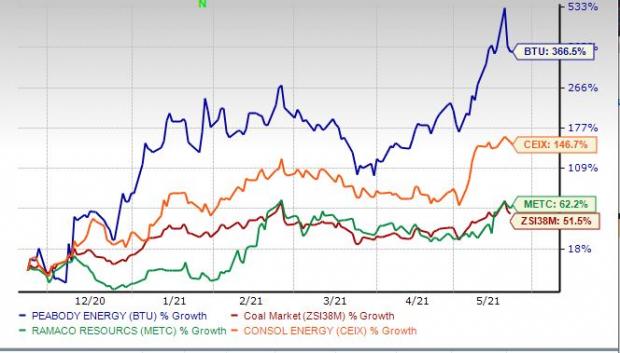