V.F. Corporation (VFC - Free Report) has reported fourth-quarter fiscal 2021 results, wherein earnings missed the Zacks Consensus Estimate, while revenues surpassed the same. However, the company’s top and bottom lines witnessed growth on a year-over-year basis, as results were significantly impacted by the pandemic-led closures in the year-ago quarter. Further, the company provided a detailed outlook for fiscal 2022.

Shares of the company dipped 6.4% in pre-market trading, owing to the lower-than-expected earnings reported in fourth-quarter fiscal 2021. The Zacks Rank #3 (Hold) company has gained 4.9% in the past three months compared with the industry’s growth of 4.1%. 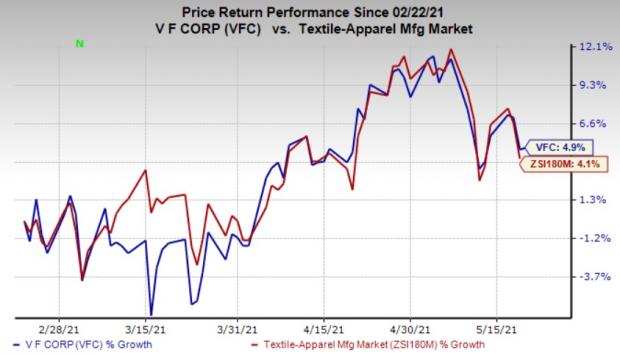 It continued to witness mixed impacts of the COVID-led closures and restrictions. In North America, about 15% of company-owned stores were closed at the end of the fiscal third quarter. Of these, the majority were Vans stores in California. Meanwhile, other stores operated with reduced capacity. Since then, the company has reopened most of the stores in the region, including all stores in California, with less than 5% of stores remaining closed at the end of the fiscal fourth quarter.

Net revenues of $2,582.7 million rose 23% year over year and surpassed the Zacks Consensus Estimate of $2,506 million. Constant-currency revenues were up 19%. Without the impact of acquisitions, revenues improved 16% (up 12% in constant dollars) on gains from VF's largest brands, e-commerce and an increase in the APAC region. Notably, the APAC region witnessed favorable year-over-year comparisons in the reported quarter, owing to the significant impacts of COVID-19 in the year-ago quarter. Additionally, revenues for the fiscal fourth quarter were aided by an extra week compared with fiscal 2021, which had 53 weeks.

Other revenues were $15 compared with $8.3 million reported in the year-ago quarter.

In fiscal 2021, the company generated operating cash flow (continuing operations) of $1.2 billion and a free cash flow of $1 billion. Moreover, it returned $756.8 million to shareholders through dividend payouts.

Additionally, the company declared a quarterly cash dividend of 49 cents per share, payable Jun 21, 2021, to shareholders with record as on Jun 10.

As part of its liquidity-preservation actions amid the coronavirus outbreak, V.F. Corp previously suspended its share-repurchase program on a temporary basis. Currently, it has $2.8 billion remaining under its current share-repurchase authorization.

The company outlined a detailed outlook for fiscal 2022. It expects revenues of $11.8 billion for fiscal 2022, suggesting year-over-year growth of 28%. The outlook includes $600 million of revenue contribution from the Supreme brand.

V.F. Corp anticipates adjusted earnings per share of $3.50, including nearly 25 cents earnings contribution from the Supreme brand. The company expects to generate adjusted operating cash flow of more than $1 billion in fiscal 2022. Moreover, it expects an effective tax rate of 15% and a capital expenditure of $350 million.

Columbia Sportswear Company (COLM - Free Report) has a long-term earnings growth rate of 31.95% and it sports a Zacks Rank #1 (Strong Buy) at present. You can see the complete list of today’s Zacks #1 Rank stocks here.

Gildan Activewear, Inc. (GIL - Free Report) has a long-term earnings growth rate of 28.57% and it presently sports a Zacks Rank #1.