Foot Locker, Inc. (FL - Free Report) posted robust first-quarter fiscal 2021 results, with the top and the bottom line increasing year on year as well as surpassing the Zacks Consensus Estimate. The company gained from strength across both stores and digital channels.

Moreover, management highlighted that despite significant operating challenges stemming from the pandemic, including store closures across key markets, the company witnessed favorable response from customers for its merchandise offerings. This, in turn, aided growth across the company’s stores as well as the digital channel. The company is optimistic regarding its product categories as well as its ability to drive long-term growth. Further, management unveiled plans to strengthen its store base and position them well for the future. In this context, the company will be closing Footaction stores. Management did not issue any guidance of the fiscal, given the uncertainty surrounding the pandemic.

Total sales of $2,153 million increased 83.1% year over year and came ahead of the consensus estimate of $1,918 million. Excluding the foreign-currency fluctuation impact, total sales rose 79.4%. The top line increased 3.6% (up 2.4% excluding foreign exchange impacts) compared with first-quarter fiscal 2019 sales. Sales growth during the quarter was mainly driven by strength in the company’s stores, which surged 99%.

Comparable store sales (comps) during the quarter increased 80.3%. Comps were largely driven by strength in the company’s stores as well as the digital channel.  On a comparable basis, the company’s digital business increased 43% and contributed 25% to total sales.

Foot Locker's gross-margin rate for the reported quarter was 34.8% compared to 23% in the prior-year quarter. The metric improved 160 basis points (bps) from first-quarter fiscal 2019. We note that merchandise margin increased 250 bps year over year, and was up 80 bps from first-quarter fiscal 2019 levels. Merchandise margin gained from significant reduction in markdowns, offset by increased freight expense due to higher digital sales.

However, SG&A expense were 19.4% of sales and provided a leverage of 750 bps year on year and a leverage of 60 bps compared with first-quarter fiscal 2019 levels.

In the reported quarter, Foot Locker opened 12 outlets, remodeled or relocated 15 stores, and shuttered 58 outlets. As of May 1, 2021, the company operated 2,952 stores across 27 countries in North America, Europe, Asia, Australia and New Zealand. Apart from these, there are 131 franchised Foot Locker stores in the Middle East.

Management stated that the company, in association with its partners, is undertaking prudent measures to strengthen its store fleet. Progressing along such lines, during the second-quarter the company will be converting nearly one-third of its Footaction stores to other existing banner concepts. Such moves will help the company focus on its iconic banners. The company will close the majority of the remaining Footaction stores as leases expire over the next two years. Management believes this strategic decision will enable improved consumer services in a post-COVID environment. 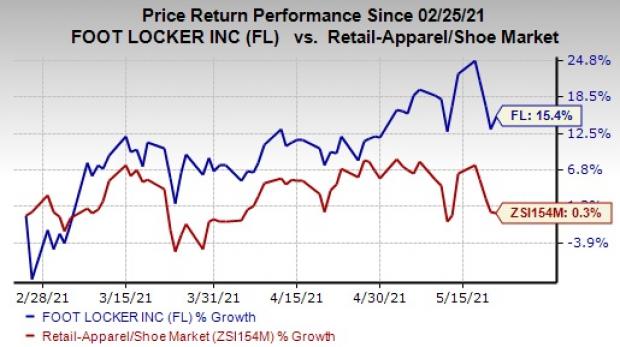 This Zacks Rank #3 (Hold) company ended fiscal first quarter with cash and cash equivalents of $1,963 million, debt of $109 million and shareholders’ equity of $2,930 million. As of May 1, 2021, merchandise inventories were $1,021 million, down 30% from the prior-year quarter’s levels. On a constant-currency basis, inventory declined 32.7%.

Moreover, it bought back 620,544 shares worth $34 million during the first quarter. In the quarter, Foot Locker returned a total of $55 million via share repurchases and dividends. Additionally, it spent $51 million in relation to store fleet, digital platforms, infrastructure as well as supply chain and logistics capabilities.

Shares of the company gained 15.4% in the past three months, compared with the industry’s gain of 0.3%.

Target Corporation (TGT - Free Report) has a long-term earnings growth rate of 13.3% and a Zacks Rank #1.