Johnson & Johnson (JNJ - Free Report) announced that the European Commission has granted approval to Ponvory (ponesimod) as an oral treatment for relapsing forms of multiple sclerosis (RMS). The S1P1 modulator will be marketed in all 27 member states of the European Union as well as in Norway, Iceland and Liechtenstein to treat adults with RMS with active disease defined by clinical or imaging features.

The approval was expected as the European Medicines Agency’s (EMA) Committee for Medicinal Products for Human Use (CHMP) had given a positive opinion in March recommending approval of the drug. We note that the FDA granted approval to the drug for a similar indication in March 2021.

The approval for Ponvory in Europe was based on encouraging data from the phase III study — OPTIMUM — which compared the drug to Sanofi’s (SNY - Free Report) blockbuster multiple sclerosis drug, Aubagio (teriflunomide). Data from the study demonstrated superior efficacy of Ponvory in reducing annualized relapse rates and MRI activity compared to Aubagio. Treatment with Ponvory achieved statistically significant 30.5% reduction in annualized relapse rate in MS patients compared to Aubagio. J&J’s drug also achieved a 56% reduction in the number of new inflammatory lesions on brain MRI compared to Sanofi’s drug at week 108 following initiation of the treatment.

Please note that Aubagio is one of the widely used first-line oral treatment for MS patients that raked in more than $2 billion in sales last year.

However, competition in the MS segment is intensifying as several companies are developing their candidates or commercializing drugs targeting relapsing MS. Among the newer drugs, in March 2020, the FDA approved Bristol Myers Squibb’s (BMY - Free Report) Zeposia (ozanimod) as an oral treatment for RMS. Novartis’ (NVS - Free Report) Kesimpta (ofatumumab) was approved by the FDA in August 2020 as a self-administered, targeted B-cell therapy for patients with RMS.

J&J’s stock has risen 8.3% so far this year compared with 7.4% increase of the industry. 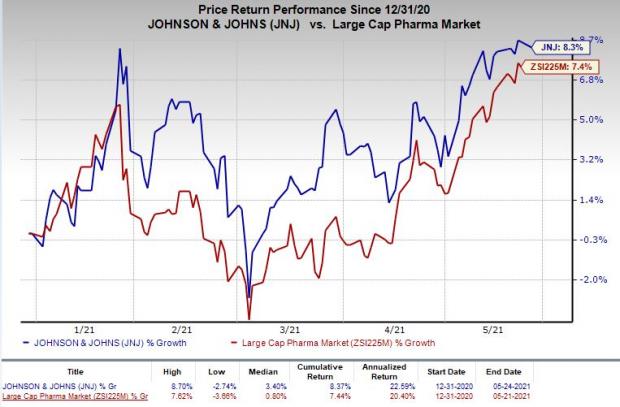 In a separate press release, J&J announced updated data from the dose-escalation phase I MajesTEC-1 study evaluating its off-the-shelf T-cell redirecting bispecific antibody candidate, teclistamab, as potential treatment for patients with relapsed or refractory multiple myeloma (r/MM). Subcutaneous administration of the candidate achieved an overall response rate of 65% after a median follow-up of more than six months in heavily pretreated patients. Meanwhile, the company is also evaluating the candidate in a phase II study in r/rMM patients.

Here's Why You Should Retain Darden (DRI) Stock for Now