BP plc, (BP - Free Report) one of the biggest oil and gas companies globally, committed to reducing its carbon footprint by investing more in renewables and shrinking its traditional oil and gas business.

Per BP CEO Looney, many of the company’s ambitions are now being well received by the energy industry, with investors supporting the significant change of strategies away from oil and gas. Looney added that the company’s oil and gas production will go down 40% by 2030 as it shifts to cleaner energy and becomes a net-zero carbon emitter.

Notably, several energy companies decided to cope with climate change by slashing greenhouse gas emissions and focusing on clean energy sources. As far as BP is concerned, investors believe that renewable energy sources will play important roles in the future and the oil giant can accomplish its plans to effectively improve its renewable energy non-oil and gas businesses over time.

Although the move initially had mixed responses, Looney mentioned that investors had been trying to digest the strategy since BP revealed its major shift to clean energy last August. However, Looney noticed growing interests in the company’s new approach since 2021, with investors better informed on how the company plans to maximize the potential from the energy transition.

He added that the unprecedented jump in the net-zero emission pledges since the pandemic fits in well with BP's strategy as the pandemic caused a dramatic economic slowdown in the energy industry mainly due to the reduced reliance on coal. Moreover, Looney believes that the company's intense cost-reduction measures and improved direction have given investors more confidence in the long-term performance of the company despite its falling exposure to the oil and gas markets.

Looney declared that BP continues to target competitive cash returns amid its shift to renewables, offering stable dividends as the world recovers from the pandemic-led crisis. Notably, energy transition businesses are expected to generate stable returns of 8-10% for decades with no decline curves.

Shares of the company have outperformed the industry in the past six months. Its stock has gained 26.2% compared with the industry’s 20.6% growth. 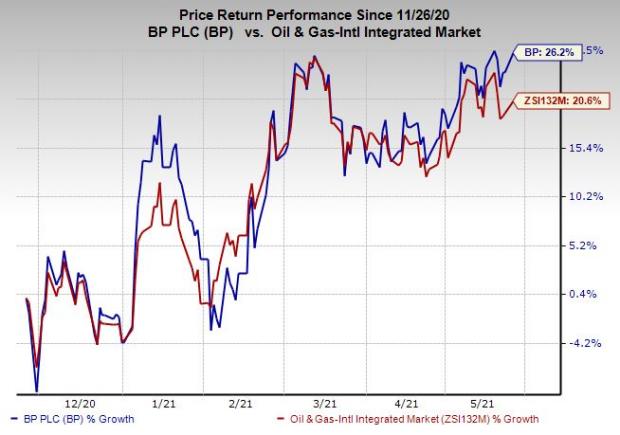 Over the past 60 days, the Zacks Consensus Estimate for Marathon’s 2021 earnings has been raised by 136%.

Summit Midstream’s earnings for 2021 are expected to rise 54.7% year over year.