Halliburton Company (HAL - Free Report) announced that its shareholders did not approve its proposed executive compensation plan. Notably, the decision, on a non-binding advisory basis, was made at the company's annual stockholder meeting on May 19.

According to a recent filing, about 53% of shareholder votes were cast against the company’s pay program. Halliburton’s board of directors is disappointed by the opposing votes on the compensation program, even though the company was ahead of its peers in total shareholder return performance and devised its pay structure in a way to attract, motivate and retain employees.

In 2019, Halliburton revised its executive compensation program and received 91% approval of the plan from shareholders. The company has been actively engaged with shareholders to deliver improved shareholder returns even in the middle of a challenging turnaround, with supply and demand imbalances in the oil and gas markets.

In 2020, Halliburton CEO Miller and other executives committed to cut payments after the coronavirus outbreak tormented the oil market and triggered unprecedented mass layoffs in the industry. Despite a pay cut, Miller reportedly received an overall compensation 293 times the median compensation for Halliburton employees. Per the company, the significant increase in 2020 compensation was due to changes in plans and reporting.

Notably, investors have been disapproving a record number of executive compensation plans this year, protesting against pay raises and the easing of performance targets coming out of the pandemic. Another energy company Phillips 66 (PSX - Free Report) also recently faced a defeat from investors on executive pay plans even though they believe executive pay amid a recession is necessary to keep top managers incentivized.

Although companies have argued that protecting executive pay is necessary, shareholders are expressing greater skepticism, claiming that the shifting of performance goalposts is unjustified and demoralizes usual employees.

Headquartered in Houston, TX, Halliburton is one of the largest oilfield service providers.

Shares of the company have outperformed the industry in the past six months. Its stock has gained 34.3% compared with the industry’s 23% growth. 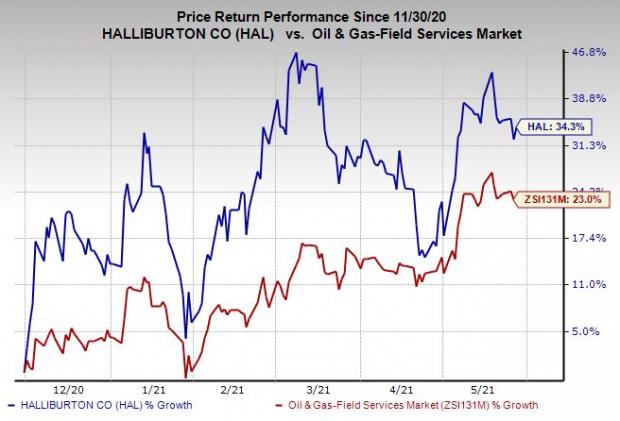 Don't Waste Your Hard-Earned Money on These Toxic Stocks