U.S. telecom stocks have witnessed an uptrend for the most of the past five trading days, tapering slightly toward the end, buoyed by the optimism surrounding proposed federal funds for domestic chip production. The turn of events followed Democratic lawmaker Chuck Schumer’s revised bipartisan legislation to approve $52 billion for boosting domestic production of semiconductor chips and R&D activities over the next five years. The funding proposal will be included in the revised bill that the Senate is likely to take up soon. Industry observers feel that the federal funding could unlock private capital and benefit the overall sector, which possibly triggered the accretion over the past week.

Various experts opine that this, in turn, could set the ball rolling for creating of about seven to 10 new chip manufacturing units with investments from states and private sector firms. Although it could take a bit of time for the investments to percolate and prove beneficial for the industry, the positive steps in this regard have seemingly infused confidence, boosting pent-up demand from post-pandemic revival. The FCC has also revealed that more than 1 million U.S. households are seeking relief under a temporary $3.2 billion broadband subsidy program created by Congress in December. The program aims to offer discounts on monthly broadband bills and on purchase of laptops or tablet computers to lower-income Americans and/or people who have been affected by COVID-19.

Meanwhile, Ethiopia has chosen a U.S.-backed consortium against that financed by China to build a nationwide 5G network. The deal was secured by a group of telecommunications firms led by Vodafone Group PLC with low-interest loans financed by the United States International Development Finance Corporation. The losing bidder was South Africa's MTN Group Ltd., which was partly financed by a China-based investor. The deal is likely to test the estranged Sino-U.S. relationship as President Biden aims to thaw ties by extending the deadline for trading with certain China-based entities that are deemed to have close ties with the communist military. The new restrictions are presently scheduled to take effect from Jun 11 and follow another move to take off China-based telecom firm Xiaomi from the U.S. government blacklist.

The DOOH platform is widely expected to witness healthy growth amid various lockdown restrictions. In such a scenario, the availability of all digital marketing opportunities under a single roof is likely to be beneficial for the advertisers. This, in turn, is likely to bolster their omnichannel marketing strategy for improved customer engagement activities.

2.     Ericsson (ERIC - Free Report) recently carried out successful tests for 5G network validity in cross border travel across vehicles as part of the EU-funded 5GCroCo project. The tests undertaken in collaboration with Swedish car manufacturing firm Volvo Group are likely to sow the seeds for large-scale connected car program in the near future.

Ericsson conducted the trial at the AstaZero test track in Sweden by deploying a 5G mobile radio network in two Volvo cars that enabled them to receive an HD map of the route ahead. The maps were updated with information from sensor readings and real-time feeds through the Mobile Edge Cloud, offering relevant information about boundaries, obstacles and turning lanes. The functionality was facilitated by the Cooperative, Connected and Automated Mobility ecosystem that enables autonomous and connected cars to behave like smart clusters rather than individual units.

3.     The top management of AT&T Inc. (T - Free Report) has debriefed investors about the underlying growth opportunities and the subsequent core business focus post its game-changing deal with Discovery, Inc. Notably, the carrier aims to spin off its media assets and merge them with the complementary assets of Discovery. John Stankey, the chief executive officer of the company, also shed some light on its continued business transformation initiatives to create long-term value for shareholders.

Post completion of the deal, AT&T will receive $43 billion in a combination of cash and debt securities and will own 71% of the new entity, while Discovery will own the remainder. The transaction is expected to enable the carrier trim its huge debt burden and focus on core businesses. Markedly, AT&T intends to achieve a leverage ratio target of 2.5 by the end of 2023. The company has been divesting its non-core assets to increase its liquidity and shed excess baggage to be nimbler.

On a GAAP basis, net income in the March quarter was $7.4 million or 11 cents per share compared with $1.6 million or 3 cents per share in the year-ago quarter. The improvement was primarily driven by top-line growth. Higher operating income was a contributing factor as well. The bottom line beat the Zacks Consensus Estimate by 8 cents. Quarterly total revenues increased 0.7% year over year to $595.8 million. The upside was primarily driven by strong revenue growth in the Satellite Services segment backed by sustained sales backlog and new contract awards. However, the top line missed the consensus estimate of $607 million.

Per the deal, Openreach will leverage Ciena’s Routing and Switching portfolio to offer a hub-and-spoke model for multiple 10GbE/100GbE links at key network locations. Powered by WaveLogic coherent optics, the 6500 Packet Optical platform offers a robust infrastructure that is highly scalable and cost-effective. This will facilitate the carrier to better address evolving customer demand for data-intensive applications across a single, converged packet-based transport network. This, in turn, will enable the company to enhance real-time visibility and proactively take steps to address any potential issue. 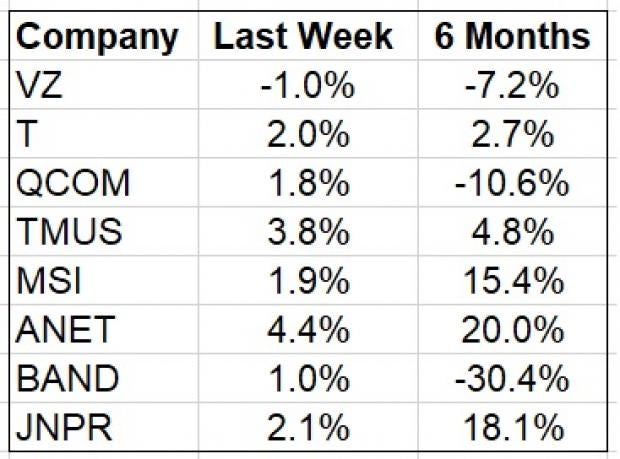 Over the past six months, Arista has been the best performer with its stock appreciating 20%, while Bandwidth declined the most with its stock falling 30.4%.

Over the past six months, the Zacks Telecommunications Services industry has gained 10.4% while the S&P 500 rallied 16.1%. 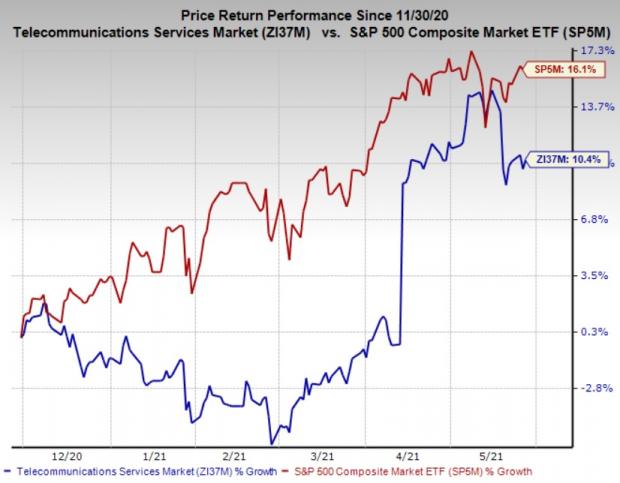