Shares of Abercrombie & Fitch Co. (ANF - Free Report) rallied 7.8% yesterday after the company reported better-than-expected top and bottom-line numbers for first-quarter fiscal 2021. Also, its earnings and sales improved year over year. Further, the fiscal first quarter marked the company’s return to profits after reporting a loss in the prior quarter. Moreover, it reported strong growth in key metrics on a two-year basis (compared with first-quarter fiscal 2019), reflecting robust growth from the pre-pandemic levels.

Abercrombie delivered adjusted earnings of 67 cents per share in first-quarter fiscal 2021 against a loss per share of $3.29 reported in the year-ago quarter. The figure also surpassed the Zacks Consensus Estimate of a loss of 39 cents. Earnings growth demonstrates the company’s robust digital sales momentum coupled with gross margin expansion and tight expense management.

Additionally, the company is gaining from the reopening of stores across all regions, except for Western Europe. In the reported quarter, it had 92% of its store base operational, with closures mainly pertaining to Western Europe. Notably, the company witnessed improvement in store performance on both year-over-year and sequential basis. Consequently, global store sales improved 77% year over year in the fiscal first quarter.

Compared with the pre-pandemic levels of first-quarter fiscal 2019, Abercrombie’s net sales improved 6% despite the closure of 1.3 million gross square feet (nearly 20%) of its store base from the referred 2019 period. Also, compared with first-quarter fiscal 2019 the company recorded 18% sales growth in the United States, which is its largest market. Digital sales improved nearly 81% from the pre-pandemic levels.

Brand-wise, net sales advanced 62% to $442.4 million and 60% to $339 million, respectively, for the Hollister and Abercrombie brands. From a geographical viewpoint, net sales rose 72% in the United States and 40% in International markets, including growth of 41% in EMEA and 42% in APAC.

Shares of this Zacks Rank #3 (Hold) company have rallied 48.5% in the past three months against the industry's fall of 1.8%. 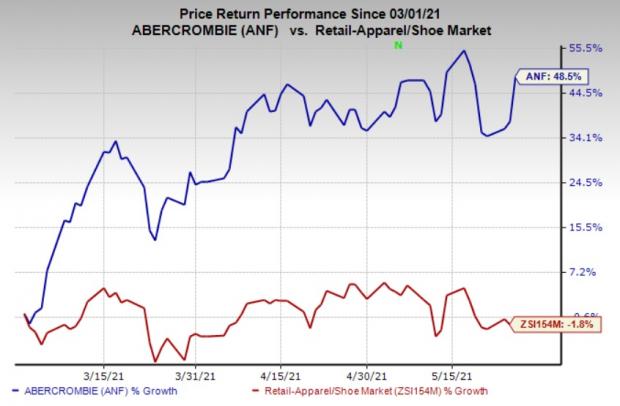 Abercrombie ended the reported quarter with cash and cash equivalents of $909 million, and long-term gross borrowings (under senior secured notes) of $344.3 million. Also, inventories were $388.6 million, down 8.9% from the prior-year quarter. Moreover, the company had available liquidity of $1.1 billion as of May 1, 2021. Its liquidity comprises cash and equivalents as well as borrowings available under the senior secured asset-based revolving credit facility of nearly $223 million.

As of May 1, 2021, net cash used for operating activities amounted to $131.4 million. Capital expenditure in the fiscal first quarter was $14.4 million.

For fiscal 2021, the company expects capital expenditure of $100 million, whereas it spent $102 in fiscal 2020. About 50% of the capital spending is expected to be used for investments in digital and technology.

In first-quarter fiscal 2021, the company resumed its share-repurchase program, buying back 1.1 million shares for $35 million. As of May 1, 2021, it is eligible to repurchase 8.9 million shares under its prior authorization approved in February 2021.

As part of its store-optimization plans, Abercrombie plans to reposition larger format flagship locations to smaller omni-channel enabled stores. Progressing on the efforts, the company earlier closed eight European flagship locations in fiscal 2020, bringing the total count of flagship stores to seven at the beginning of fiscal 2021. In the first quarter of fiscal 2021, it closed the Abercrombie & Fitch brand’s store in Orchard Road Singapore flagship, bringing the flagships store count to six.

Abercrombie did not provide guidance for fiscal 2021. However, the company expects to continue with the progress made since 2020. It anticipates retaining the gross margin rate through continued tight inventory management, which is likely to offset the potential cost headwinds for the rest of the year. For operating expenses, the company expects to tightly control costs, with a focus on using a portion of the occupancy savings for funding fulfillment, marketing and digital investments.

In second-quarter fiscal 2021, the company anticipates net sales above the comparable 2019 level of $841 million. It does not expect the government mandates for store closures to increase from the current levels. However, it awaits more clarity on when the remaining countries in EMEA will resume full operations. The company anticipates successfully managing the supply chain and labor constraints.

It expects the gross margin rate to increase at least 200 bps in the fiscal second quarter from 60.7% reported in the prior-year quarter. The company remains cautiously optimistic about its ability to deliver AUR improvements through reduced promotions and clearance activity as well as potential FX tailwinds. This is likely to be partly offset by higher product costs. Operating expenses are expected to increase 15-20% year over year from adjusted operating expenses of $404 million reported last year. Operating expense growth is likely to be driven by the reversal of certain COVID-related savings earned in 2020, higher fulfillment expenses, and increased marketing, payroll and digital project spending. This is expected to be partly offset by lower occupancy costs.

Here's Why You Should Add UGI Stock to Your Portfolio Now