Management highlighted that its current quarter-to-date comparable store sales are progressing ahead of expectations. This Zacks Rank #3 (Hold) company is on track with executing long-term growth opportunities and expanding its store base. Undeniably, management continues to remain cautious regarding the impact of the pandemic upon its business.

Here’s How the Top & the Bottom Lines Fared

Ollie’s Bargain posted adjusted earnings of 80 cents a share, which beat the Zacks Consensus Estimate of 66 cents and surged 64.9% from 49 cents reported in the year-ago quarter.

Net sales increased 29.5% year over year to $452.5 million and surpassed the consensus mark of $423.9 million. Surge in the top line can be attributed to comparable store sales increase and new store unit growth coupled with sturdy performance. Further, management highlighted that sales during the quarter benefitted from the company’s efforts to create an alignment between value driven merchandise and customer demand. It also benefitted from higher consumer spending stemming from the third-round of federal relief funds for the ongoing COVID-19 pandemic.

A Look Into Margins

Gross profit surged 30.1% year over year to $182.6 million during the quarter under review, while gross margin expanded 20 basis points (bps) to 40.4%. The upside can be attributed to improvement in the merchandise margin, partly offset by deleveraging of supply chain expenses due to higher transportation costs.

SG&A expenses increased 16.3% to $104.4 million from the prior-year quarter’s levels. This was due to increase in number of stores and higher store payroll as well as variable selling expenses. As a percentage of net sales, SG&A expenses declined 260 bps to 23.1%. The decline was caused by significant leverage in occupancy, payroll and other costs owing to comparable store sales growth along with cost-containment efforts.

Operating income rose 65.7% to $71.2 million in the first quarter. Operating margin increased 340 basis points to 15.7% as a result of leveraging of all expense components stemming from rise in comparable store sales and increase in gross margin.

During the first quarter, Ollie’s Bargain opened 11 new stores and closed two locations, thereby taking the total count to 397 stores in 25 states. Among the new stores opened, two were essentially relocations. Additionally, management informed that since the end of the first quarter, the company has opened another eight stores, taking the total to 19 stores opened this year. 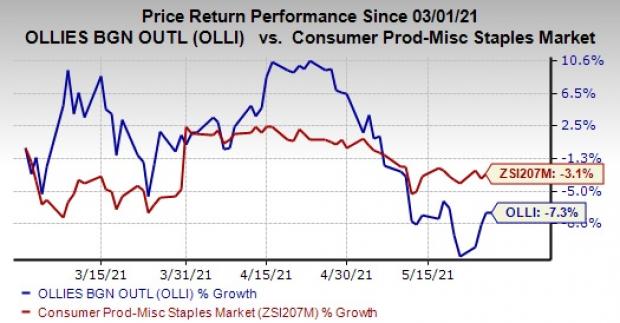 Ollie’s Bargain ended the quarter with cash and cash equivalents of $472.2 million (as of May 1, 2021), reflecting significant increase from $119.4 million as of May 2, 2020. The company had no borrowings under its $100-million revolving credit facility and $91.1 million of availability under the facility, as of the end of first-quarter fiscal 2021.

As of May 1, 2021, its total borrowings (comprising solely of finance lease obligations) were $0.9 million. Long-term debt was $610 million, while stockholders’ equity was $ 1,386.6 million. Inventories, as of the end of first-quarter fiscal 2021, increased 3.3% to $355.2 million. The company incurred capital expenditures of $9.5 million in the first quarter.

We note that shares of the company have fallen 7.3% in the past three months compared with the industry’s decline of 3.1%.

Darling Ingredients Inc. (DAR - Free Report) with a Zacks Rank #2, has a trailing four-quarter earnings surprise of 29.8%, on average.

United Natural Foods, Inc. (UNFI - Free Report) has a trailing four-quarter earnings surprise of 13.6%, on average, and a Zacks Rank #2.