The company delivered earnings of $4.21 per share against the year-ago quarter’s net loss of $1.43. Also, earnings beat the Zacks Consensus Estimate of $2.29 per share.

Net sales came in at $1,133.9 million, which surpassed the Zacks Consensus Estimate of $1,096 million. Moreover, the metric increased 34.2% from $844.7 million posted in the year-ago quarter, driven by a marginal rise in pound sold and higher selling prices.

The company’s average feed cost per pound of poultry products processed increased 26.6%. Prices paid for corn and soybean meal were higher by 39.7% and 40%, respectively. Soybean meal and corn are part of the company’s primary feed ingredients.

We note that cost of sales increased from $941.9 million to $832.3 million in the reported quarter due to a rise in non-feed expenses and higher pounds of poultry products sold. Further, SG&A expenses rose to $64.2 million from $56.2 million reported in the year-ago quarter due to rising legal costs, an increase in compensation and COVID-related costs to the tune of $4.9 million.

The company’s operating income came in at $127.7 million against the operating loss of $43.8 million reported in the year-ago quarter.

Sanderson Farms ended the quarter with cash and cash equivalents of $122.9 million, long-term debt of $55 million and total shareholders’ equity of $1,510.3 million. Moreover, it has $974.8 million remaining under its existing revolving credit facility. For fiscal 2021, capital expenditure is likely to be $191.9 million.

Going ahead, broiler production is expected to remain drab as the company reduced target live weight at its Hazlehurst, MS, processing plant in a bid to focus better on grocery items. Also, it intends to resume full production at all its food service plants except St. Pauls, NC, and Palestine, TX, by early September. Production at its plants was previously reduced due to the lack of demand. For fiscal 2021, the company projects nearly 4.83 billion pounds of fresh chicken, down roughly 0.3% from last year. Notably, it will process fresh chicken of almost 1.22 billion pounds and 1.23 billion pounds in the fiscal third and fourth quarters, respectively. Apart from these, feed grain prices are likely to be higher in the second half of fiscal 2021.

Shares of this Zacks Rank #3 (Hold) company have increased 23.7% year to date, outperforming the industry’s rise of 13.4%. 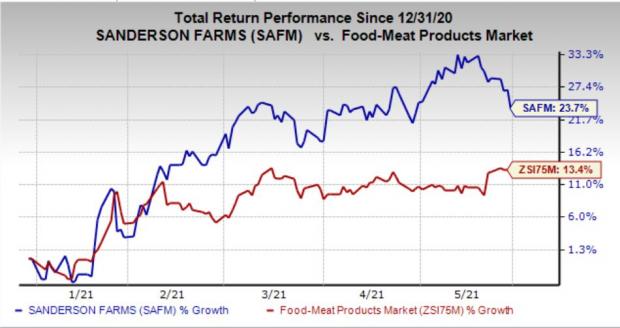 Here's Why You Should Hold Radian Group (RDN) in Your Portfolio