Box, Inc. (BOX - Free Report) reported first-quarter fiscal 2022 earnings per share of 18 cents, which surpassed the Zacks Consensus Estimate by 5.9%. Further, the figure surged 80% from the year-ago period but decreased 18.2% from fiscal fourth-quarter 2021.

Total revenues were $202.4 million, surpassing the consensus mark of 200.5 million. Also, the top line increased 10% year over year and was above the company’s guided range of $200-$201 million. Further, the figure increased 2% from the fiscal fourth quarter.

Further, it closed 59 deals during the fiscal first quarter, up 48% year over year.

Additionally, the company saw a record 49% attach rate of its suites due to increasing demand for multi-product suite offerings.

Coming to price performance, Box has returned 26.7% on a year-to-date basis against the industry's decline of 11.2%.

Notably, increasing work-from-home trends and rising demand for cloud applications as the result of the ongoing pandemic are likely to continue benefiting the company in the near term. 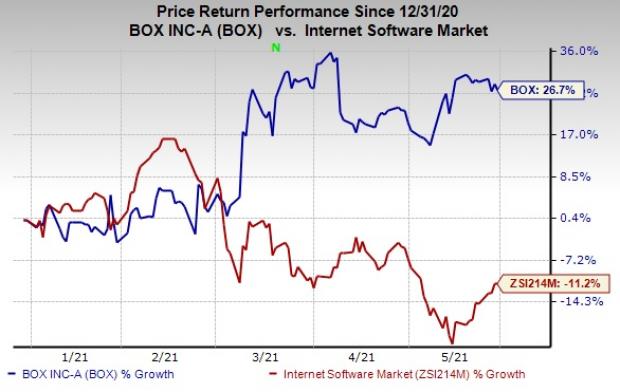 Billings were $159.4 million for the reported quarter, which increased 24% year over year. This improvement was due to early renewals from customers who had been set to renew in the fiscal second quarter.

Deferred revenues were $423.2 million, improving 15% from the prior-year quarter.

Further, the company signed a definitive agreement to acquire SignRequest in the reported quarter.

Non-GAAP gross profit for the fiscal first quarter was $147.9 million, up 10.3% year over year. As a percentage of revenues, the figure was flat with the year-ago quarter.

On a non-GAAP basis, the company recorded operating margin of 17%, which expanded 800 bps from the prior-year quarter.

Moreover, accounts receivables amounted to $112.3 million at fiscal first quarter-end, which decreased from $228.3 million at the end of the prior quarter.

Further, the company generated $94.8 million of cash from operations in the reported quarter, up from $57.5 million in the previous quarter. Additionally, it generated free cash flow of $75.9 million in the fiscal first quarter.

For second-quarter fiscal 2022, Box expects revenues between $211 million and $212 million. The Zacks Consensus Estimate for the same is pegged at $209.2 million.

On a non-GAAP basis, the company projects earnings per share of 17-18 cents. The Zacks Consensus Estimate for the same is pegged at 19 cents per share.

On a non-GAAP basis, the company projects earnings per share of 71-76 cents. The consensus mark for the same is pegged at 79 cents per share.

Long-term earnings growth rate for MACOM Technology and Analog Devices is currently projected at 37% and 12.3%, respectively.