In addition to the contracts, General Electric yesterday hinted that its cash generation in the second quarter of 2021 will be better than the year-ago quarter.

It is worth noting here that the company’s shares gained 7.09% yesterday, ending the trading session at $14.35.

As noted, GE Renewable Energy will provide as well as work for the installing and the commissioning of its Cypress onshore wind turbines at South Central Vietnam-based 88 MW wind farm of BIM Wind. The turbines to be delivered will feature a two-piece blade design. In addition to the turbine-supply contract, GE Renewable Energy will provide operation and maintenance services for 15 years.

The project is expected to be operational by the end of third-quarter 2021.

Interestingly, GE Renewable Energy won a supply contract for its Cypress onshore wind turbines a couple of days as well. The deal required the company to deliver 16 units of its Cypress turbines to the Finland-based 88 MW Puskakorpi wind farm. Also, the company will provide services for 30 years.

Renewable Energy provides offshore wind turbines, high-voltage equipment, blades for wind turbines (onshore and offshore), and other products and services. Its revenues in the first quarter of 2021 increased 1.7% year over year to $3,248 million. Organically, the segment’s sales were flat year over year, while orders increased 13%.

GE Power Conversion’s contract involves the modernization of the Bochum hot rolling mill’s drive and automation system (related to side guides and downcoiler 3). The work will complete in three steps and is likely to be complete in the first quarter of 2022. Notably, the services provided by Power Conversion will help retain productivity at the mill as well as secure the availability of spare parts.

The cash flow expectation for the second quarter of 2021 was communicated by General Electric’s chief financial officer, Carolina Dybeck Happe, at Wolfe Research Transportation and Industrials Conference held yesterday. In addition to year-over-year expectation, cash flow improvement in the second quarter is expected to be somewhat similar to the first quarter.

General Electric currently has a market capitalization of $117.6 billion and a Zacks Rank #3 (Hold). Portfolio-restructuring measures, healthy liquidity position and solid contracts secured are expected to aid the company in the quarters ahead. Persistent challenges in Aviation are concerning.

In the past three months, General Electric’s share price has gained 13.1% as compared with 12.1% growth recorded by the industry. 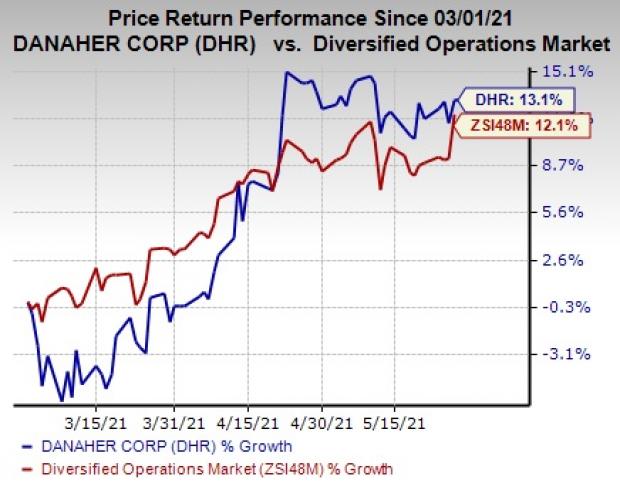 In the past 60 days, earnings estimates of Griffon, Crane and ITT have improved for the current year. Also, the earnings surprise for the last reported quarter was 50.00% for Griffon, 26.72% for Crane and 21.84% for ITT.