Wall Street Completes a Mixed May: What Next for June?

Finally, the month of May was not as bad for equity investors as it had seemed due to a spike in volatility on market participants' anticipation of the impending inflation. The common adage of Wall Street — sell in May and go away — failed this year.

Meanwhile, investors are concerned about June. Historically, June is one of the weakest months on Wall Street. According to Bespoke Investment Group, the Dow has gained a mere 0.12% in June over the past 50 years. The index had been in positive territory in June 52% of the time. Moreover, over the last 20 years, the blue-chip index ended in positive in June in just 40% of the time.

The U.S. economy is recovering very strongly. The manufacturing industries that did well during the pandemic are still maintaining their impressive performances. The services sector, which was the worst affected during pandemic, rebounded strongly since the beginning of this year.

The labor market, one of the worst-suffering segments of the U.S. economy due to pandemic-related devastations has shown systematic recovery in the past six reported weeks. In fact, U.S. businesses are currently suffering from a shortage of skilled labor. In this regard, the job report of May to be released on Jun 4, will be of immense importance.

The number of new coronavirus cases is currently the lowest. The U.S. government is aggressively deploying COVID-19 vaccination nationwide. Most of the businesses that were closed due to lockdowns have reopened with new social distancing norms.

On the other hand, the impending inflation is the primary concern of market participants. On May 28, the Department of Labor reported that the core PCE inflation (excluding volatile food and energy prices) gained 0.7% in April. Year over year, the core PCE inflation — Fed's favorite gauge of inflation — climbed 3.1% in April after rising 1.9% in March, marking the highest monthly gain in 13 years. The figure was well above the Fed's target rate of 2%.

On May 12, the Department of Labor reported that the consumer price index (CPI) — popularly known as household inflation —  jumped 4.2% year over year in April, its highest since September 2008. Month over month, the CPI climbed 0.8% after increasing 0.6% in March. The core CPI (excluding volatile food and energy items) surged 0.9% in April after gaining 0.3% in March, marking the largest monthly gain since 1981.

The Fed will conduct its next FOMC meeting during Jun 15-16, the decision taken in which will have an immense effect on stock markets. So far, the central bank has maintained its stand that any inflation in 2021 will be transitory. However, it did signal that if economic recovery remains faster than expected and the price level continues to rise, the Fed may consider readjusting its policy variables.

The first thing will be the gradual termination of the $120 billion per month quantitative easing program. A reduction in bond purchase will reduce demand for bonds. Consequently, prices will fall and yield to maturities will increase. This will raise the market's risk-free interest rate.

At present, June is equally balanced with positive and negative factors. At this stage, it will be prudent to invest in large-cap (market capital > $40 billion) stocks subject to certain conditions.

First, these companies generally have an established business model and brand name. Second, these companies are regular dividend payers with current dividend yield > 2%. This will act as an income stream during market's downturn.

Third, these stocks have strong growth potential for the rest of 2021. Fourth, these companies have seen solid earnings estimate revisions within the last 7 to 30 days indicating robust business prospects in the near future. Fifth, these stocks have a long-term (3-5 years) growth rate higher than the bench mark S&P 500 Index.

Finally, these stocks must carry either a Zacks Rank #1 (Strong Buy) or 2 (Buy). You can see the complete list of today’s Zacks #1 Rank stocks here.

The chart below shows the price performance of six above-mentioned stocks year to date. 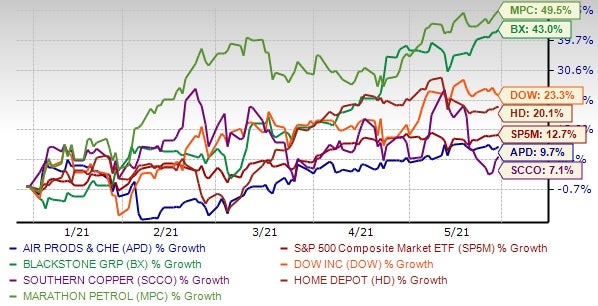