Last week, the European Automobile Manufacturers Association released data for commercial vehicle registrations made in April 2021. New registrations edged up 179.2% year over year to 171,283 units. The upside was a result of COVID-induced demand slump in the year-ago period. Many of the European Union markets saw double-digit surge in April 2021. Registrations in major markets like Spain, Italy and France skyrocketed 547.3%, 642.3%, and 412.9%, respectively. Germany witnessed year-over-year growth of 60% in commercial vehicle registrations.

Last week, Ford (F - Free Report) made big headlines as it took its e-mobility game a notch higher. Shares of the company rose more than 11% for the week ended May 28. Meanwhile, the electric vehicle (EV) behemoth Tesla (TSLA - Free Report) delayed Model S Plaid deliveries yet again. The deliveries, originally scheduled to commence on Jun 3, have now been pushed to Jun 10. Another promising name in the EV industry, NIO Inc. (NIO - Free Report) — dubbed as the ‘Tesla of China’ — renewed its agreement with Jianghuai Automobile Group for the joint manufacturing of NIO vehicles for another three years.

Ford announced a new initiative, themed “Delivering Ford+”, wherein the company detailed priority areas of the Ford+ plan for growth and value creation based on ‘always-on’ customer relationships as well as leadership in EVs. The company expects 40% of global vehicle volume to be all-electric by 2030. Ford increased planned investment in EVs, including battery development, to more than $30 billion by 2025. Other details included achieving an 8% adjusted profit margin in 2023 and significantly increasing its commercial vehicle business.

Last week, Ford, which currently carries a Zacks Rank #3 (Hold), launched the all-new 2022 F-150 Lightning Pro — the first-ever all-electric F-Series truck designed for commercial customers. F-150 Lightning Pro will be built at the Rouge Electric Vehicle Center in Dearborn starting next spring. The vehicle hits the roads next year. (Here's What You Should know About Ford's F-150 Lightning Pro)

Cummins Inc. (CMI - Free Report) announced plans to construct one of the world’s largest electrolyzer plants for the production of green hydrogen in Castilla-La Mancha, Spain, in collaboration with its partner Iberdrola. The investment decision comes after Iberdrola, one of the world’s largest energy companies, and Cummins joined forces for large-scale hydrogen production projects in Spain and Portugal. This alliance positions Cummins as a leading supplier of electrolyzer systems for mass projects in Iberia, and makes Iberdrola a leading developer of electrolyzer projects as well as hydrogen supplier to final industrial customers. (Cummins Ups Ante in Hydrogen Capabilities in Spain)

AutoZone, Inc. (AZO - Free Report) reported earnings of $26.48 per share for third-quarter fiscal 2021 (ended May 8, 2021), up from the prior-year figure of $14.39. The bottom line also surpassed the Zacks Consensus Estimate of $19.35 per share. Robust comparable sales growth led to this outperformance. Net sales also increased 31.4% year over year to $3,651 million and topped the Zacks Consensus Estimate of $3,176 million. For the fiscal third quarter, AutoZone repurchased 663,328 shares for $900 million at an average price of $1,357 per share. The company has shares worth $1.3 billion remaining in the current repurchase authorization. (AutoZone Q3 Earnings Trump Estimates, Surge 84% Y/Y)

Westport Fuel Systems Inc. (WPRT - Free Report) announced its decision to acquire Stako sp. z o.o., the liquid petroleum gas fuel storage manufacturing company. The transaction is estimated to be worth 5 million euros. The acquisition is in sync with Westport’s goal of meeting the rising global demand for clean and cost-effective transportation solutions. In addition, the deal broadens the company’s product offering by acquiring capability for liquified petroleum gas. As a foremost global supplier of alternative fuel systems, the buyout will strengthen Westport’s position to offer a range of industry-leading solutions to prominent global OEMs. (Westport's Stako Acquisition to Enhance Product Portfolio) 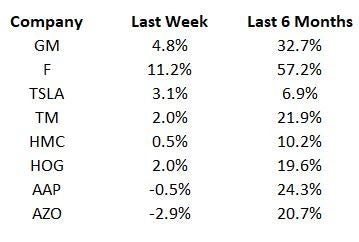 Car enthusiasts will be keeping a close watch on May 2021 U.S. car sales, which will be coming out this week. Industry watchers would be closely tracking the sales reports of auto biggies including Ford, Volkswagen, Honda and Toyota. Investors are awaiting the quarterly results of Advance auto Parts, scheduled to be out on Jun 2.