Verrica Pharmaceuticals (VRCA - Free Report) announced that the FDA has extended the review period for the new drug application (“NDA”) for its lead pipeline candidate, VP-102, by three months. The regulatory authority was previously expected to give a decision related to the NDA by Jun 23, which is now expected by Sep 23, 2021.

Please note that the NDA is seeking approval of its proprietary drug-device combination candidate, VP-102, as a potential treatment of molluscum contagiosum (molluscum), a highly contagious and primarily pediatric viral skin disease. There is no FDA-approved therapy or an established standard of care for this indication, suggesting significant market opportunity for the candidate following a potential approval.

Shares of Verrica fell 4.4% following the delay in the PDUFA date. In fact, the company’s shares have declined 2.1% so far this year compared with the industry’s decrease of 10.9%. 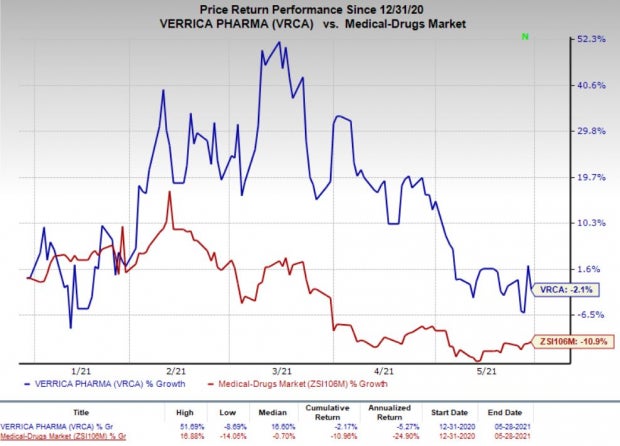 We remind investors that the company had originally filed the NDA for VP-102 in September 2019. However, the FDA issued a complete response letter for the NDA in July 2020, noting deficiencies that preclude discussion of labeling and post-marketing requirements/commitments. The regulatory agency requested additional data on chemistry, manufacturing and controls as well as Human Factors validation. The company re-submitted the NDA with the requested data in December last year. The FDA accepted the re-submission in February and set a PDUFA goal date of Jun 23, 2021.

The company in its recent press release stated that the FDA has extended the review period for the VP-102 NDA as the regulatory body needs additional time to review the requested data submitted in February.

Apart from molluscum, Verrica is also developing the candidate as a potential treatment for common warts and external genital warts in mid-stage clinical studies. The company is planning a phase II study on its another pipeline candidate, VP-103, as a potential treatment for plantar warts. It plans to submit an investigational new drug application for its pre-clinical candidate, LTX-315, in the second half of 2021 to evaluate it in malignant and pre-malignant dermatological indications.

Organogenesis’ earnings per share estimates have increased 200% for 2021 over the past 30 days. The stock has jumped 136.8% so far this year.

Zoetis’ earnings per share estimates have moved 1.6% north for 2021 over the past 30 days.