Suncor Energy (SU) Beats Industry in Past 3 Months: Here's Why

Even though a stock displays an impressive run on the bourses, some investors may steer clear of adding it to their portfolios, thinking there is not much upside potential left for further growth. While this is true in certain cases, a high-flying company still necessarily means that it's a meatier option for bargain right now.

In the past three months, shares of Suncor have gained 14.1% compared with the industry’s 0.3% growth. Moreover, an upward earnings estimate revision for fiscal 2021 raises analysts’ optimism on the company’s growth potential. 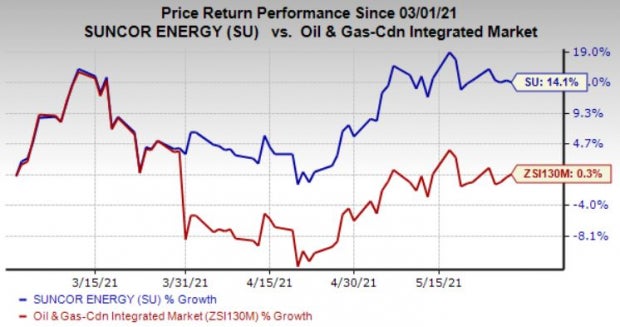 Despite the company’s lower-than-expected earnings in the last reported quarter, investors were impressed by its ability to reduce total debt by $1.1 billion in the first quarter of 2021. Based on its capability to strengthen its cost structure, Suncor reaffirms its plans to maintain a prudent capital approach and estimates to repay further debt in 2021, thereby indicating its capacity to generate cash flow.

What Makes  It  a Promising Pick?

This leading premier integrated energy player in Canada currently has a Zacks Rank #1 (Strong Buy) and a VGM Score of B. Our research suggests that stocks with a VGM Score of A or B when combined with a Zacks Rank of 1 or 2 (Buy) offer the best investment opportunities. Thus, the company appears to be a compelling investment proposition at the moment. You can see  the complete list of today’s Zacks #1 Rank stocks here.

The direction of estimate revisions serves as a key indicator when it comes to stock movement. The Zacks Consensus Estimate for 2021 earnings has been revised 69.5% upward over the past 60 days while the same for 2022 has moved 13.6% north.

Suncor has a decent surprise record. Its earnings surpassed the Zacks Consensus Estimate in two of the preceding four quarters while missing the same on the remaining occasions, the average beat being 69.48%.

During the first quarter of 2021, Suncor successfully reduced total debt by $1.1 billion and repurchased more than $300 million of common shares. Importantly, the company's debt-to-capitalization as of the end of the first quarter was 32.8%, improving from 34.4% three months ago.

Moreover, Suncor, the second-largest oil producer in Canada has strong liquidity to manage through the commodity price cycle. The company has debt maturities worth C$1.8 billion during the 2021-2022 forecast period and C$7.9 billion in total liquidity. Further, Suncor has cash and cash equivalents of C$1.4 billion. Its robust liquidity position will allow it to sustain its dividend even if oil prices stay at modest levels for long.

Additionally, Suncor’s latest initiative aligns with the national goal of Canada and is about 25% stronger on an intensity basis per barrel than its 2015 target.

In 2015, the Canada government announced a climate target to reduce 30% of the country’s greenhouse gas (GHG) emissions below the 2005 levels by 2030. The company went a step ahead of its peers to slash overall emissions across its operations by 10 million tons per year within 2030. Notably, this will imply a nearly 30% cut in toxic emissions, which amounted to 29 million tons in 2019.

Moreover, Suncor intends to increase production to an unprecedented level of 800,000 barrels per day within the 2021-2025 time period while curbing more than one-third of GHG emissions. The company plans to raise oil production by debottlenecking or enhancing the efficiency of its existing facilities instead of developing new projects. It aims to increase its profitability by C$2 billion per year within 2025.

Also, Suncor’s recent collaboration with the utility firm ATCO Ltd. will develop a clean hydrogen facility near Fort Saskatchewan, Alberta. Suncor and ATCO are expected to produce more than 300,000 tons of clean hydrogen per year at the facility, which is equivalent to almost 450,000 cars going off the road, annually.

The project will be a leading solution in trimming emissions with made-in-Canada energy ingenuity while putting Alberta at the front line of the clean hydrogen economy. It is a breakthrough in creating jobs and growing the economy in an environmentally-friendly way.