Here's Why Viasat (VSAT) is an Attractive Pick for Investors

Shares of Viasat, Inc. (VSAT - Free Report) , have gained 55% in the past six months compared with 1.9% growth of the industry. Currently, the stock has a VGM Score of A. The company delivered a trailing four-quarter earnings surprise of 220%, on average. The Zacks Consensus Estimate for its current-year and next-year earnings has been revised 60% and 216.7% upward, respectively, over the past 30 days. Also, it has a long-term earnings growth expectation of 24%. 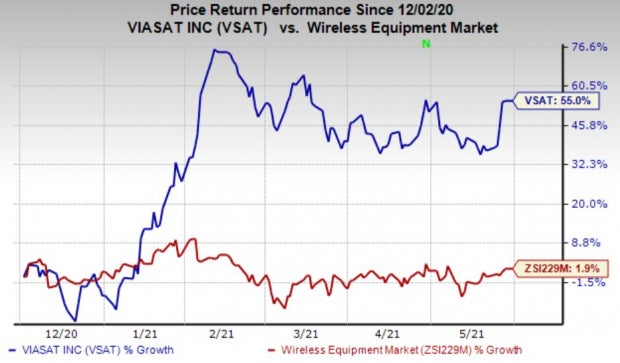 Recently, it reported relatively healthy fourth-quarter fiscal 2021 financial results, wherein both earnings and revenues increased on a year-over-year basis, driven by fast-tracked investments in ViaSat-3 constellation, sustained momentum in Satellite Services segment, diligent operational execution, new contracts and accretive subscriber base. Backed by a robust vertically-integrated business model, Viasat expects the momentum to continue in the upcoming quarters despite the COVID-19 woes. With such healthy business fundamentals, this Zacks Rank #2 (Buy) stock appears to be a good bet for investors at present. You can see the complete list of today’s Zacks #1 Rank (Strong Buy) stocks here.

With the rapid spread of the smartphone market and usage of mobile broadband, user demand for coverage, speed and quality has increased, which in turn is fueling the demand for network tuning and optimization to maintain high data traffic. Viasat is trying to make the most out of this uptrend. The company’s impressive bandwidth productivity sets it apart from conventional and lower-yield satellites providers that run on incumbent business models. Its high-capacity Ka-band satellite capitalizes on global bandwidth to provide superior Internet services with appropriate pricing, thereby boosting its competitiveness in the broader market.

Viasat’s Satellite Services business is progressing well with key metrics, including ARPU (average revenue per user) and revenues showing impressive growth. ARPU is growing on the back of a solid retail distribution network, which accounts for a rising proportion of high value and high bandwidth subscriber base. Furthermore, the rising adoption of in-flight Wi-Fi services in commercial aircraft is also proving advantageous to business growth. Although current travel restrictions have affected the air traffic in fiscal 2021, accelerated vaccination initiatives, passenger traffic growth and airline fleet expansion with the rebound of Boeing 737-MAX aircraft in early fiscal 2022 are expected to give a significant push to its in-flight connectivity revenues.

Further, it is ramping up investments in the development of its revolutionary ViaSat-3 broadband communications platform, which will have nearly 10 times the bandwidth capacity of ViaSat-2. The ViaSat-3 payload program has begun its transition to the construction phase. These satellites will be capable of covering one-third of the world, including the Americas. The second ViaSat-3 will cover Europe, Middle East and Africa region. In fact, payload integration for ViaSat-3 (Americas) has already been completed. The company is currently focused on construction of the payloads for ViaSat-3 (Europe, Middle East, and Africa) and ViaSat-3 (Asia-Pacific).

The ViaSat-3 platform will help to form a global broadband network with sufficient network capacity to allow better consumer choices with an affordable and high-speed Internet and video streaming service. In short, Viasat has garnered enough economics of scale and scope to serve vast emerging markets in South America, Africa, Middle East and Western Asia. Also, financial prudence in capital investments, robust pipeline of new business opportunities, market share gains and tuck-in acquisitions with an extended geographic footprint are likely to bolster its business roadmap. All these factors offer Viasat a solid competitive edge over its peers, thereby bolstering its growth in the long run.