Valued at $112.7 million, the contract is scheduled to be completed by December 2024. Per the terms of the agreement, Raytheon will perform Navy transition involving production efforts for RAM Block 2B and exercise options.

Majority of the work related to this deal will be carried out in Tucson, AZ.

The RAM guided missile weapon system is the world's most modern ship self-defense weapon that has been designed to destroy anti-ship missiles. It is currently deployed on more than 165 ships in 11 countries, ranging from 500-ton fast attack craft to 95,000-ton aircraft carriers.
Its Block 2 variant represents the latest evolution in the development of the RAM missile, which makes the missile two and a half times more maneuverable, with one and a half times the effective intercept range.

Raytheon Missiles & Defense (RMD) is a leading designer, developer, integrator producer and sustainer of integrated air and missile defense systems, with the unit serving as a prime contractor or major subcontractor on numerous missile and related programs with the U.S. Department of Defense (DoD).

Its expertise in manufacturing combat proven missiles has been consistently boosting performance of the RMD unit. The latest contract win will  bolster this unit’s performance in the coming days.

Raytheon Technologies, a Zacks Rank #3 (Hold) stock, has gained 24.1% in the past year compared with the industry’s growth of 14.4%. You can see the complete list of today’s Zacks #1 Rank (Strong Buy) stocks here. 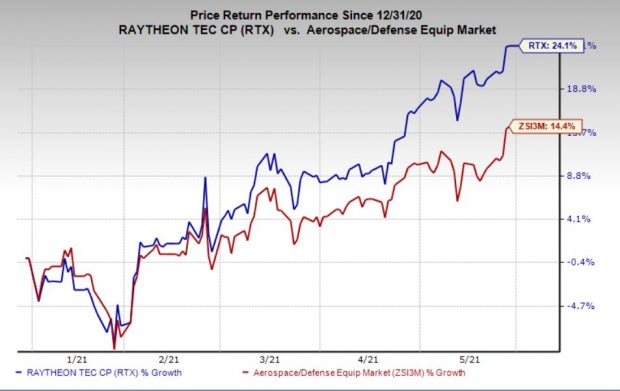