With air-travel demand improving in the United States (particularly for leisure), United Airlines (UAL - Free Report) raised its total unit revenue guidance for the second quarter of 2021. In fact, driven by the uptick in air-travel demand, Hawaiian Holdings (HA - Free Report) too provided an upbeat outlook for second-quarter 2021 revenues.

1. In a SEC filing, United Airlines’ management stated that as of May 25, 2021, “consolidated yields on tickets issued since the beginning of May 2021 for travel in the second quarter 2021 have reached levels similar to 2019, with domestic leisure yields exceeding 2019 levels for the same time period.” Consequently, the company now expects Total Revenue per Available Seat Mile or TRASM to decline approximately 12% in the second quarter of 2021 from the reading recorded for the same period in 2019. This is an improvement from the carrier’s previous guidance of a decrease of around 20%. Due to better yield performance, United Airlines, currently carrying a Zacks Rank #3 (Hold), estimates its adjusted EBITDA margin for the second quarter to be around (11%), higher than the previous expectation of about (20%).

Southwest Airlines (LUV - Free Report) had also issued a bullish update for second-quarter cash flow owing to the uptick in air-travel demand as elucidated in the previous week’s write-up.

2. Citing strong demand for air travel in its markets across North America, Hawaiian Holdings expects second-quarter revenues to plunge in the 42-46% range from the second-quarter 2019 actuals. The fresh guidance improved from the previous forecast of a 45-50% decline. Backed by a stronger revenue scenario, the company now predicts adjusted EBITDAAR (Earnings before interest, taxes, depreciation, amortization and restructuring or rent costs) between a negative $40 million and a negative $10 million compared with its prior anticipation of a negative $70 million and a negative $20 million.

3. Allegiant aims to start six nonstop flight services in the summer of 2021, offering customers connectivity to premier destinations in Florida and the west. The carrier’s new menu includes two routes to the Phoenix Sky Harbor International Airport (PHX), which Allegiant will serve for the first time. As for Allegiant’s expansion to PHX, its first flight operations will begin in October with nonstop services to both Provo (starting Oct 8) and Stockton (effective Oct 15). Moreover, Aug 19 onward, the carrier will initiate operating a new nonstop route connecting the Phoenix-Mesa Gateway Airport with Pittsburgh, PA.

4. Beginning the current month, Laurie Villa will be JetBlue’s chief people officer. She will be replacing the long-serving Mike Elliott, who will step down this August after being associated with the Long Island City, NY-based low-cost carrier since 2010. Notably, Villa is a veteran, having assumed various leadership roles for over two decades now. Of late, she was associated with another low-cost carrier Spirit Airlines (SAVE - Free Report) in the capacity of a chief human resources officer for six-and-half years. At JetBlue, Villa will report directly to the CEO Robin Hayes.

5. With sights set on meeting the anticipated demand surge during summer, Delta Air Lines (DAL - Free Report) strengthened its long-standing interline partnership with the regional carrier Cape Air. Through this strategic move, the airline aims to provide its customers with access to more coastal destinations in the Northeast United States. 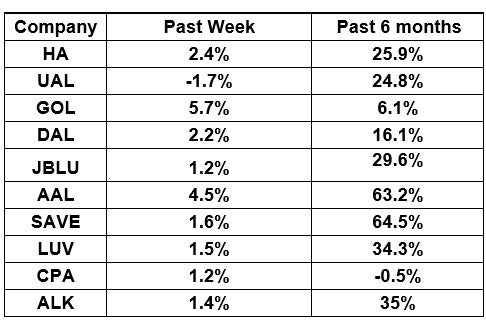 Stay tuned for May traffic reports from the likes of Ryanair Holdings (RYAAY - Free Report) .

Shell (RDS.A) to Divest Mobile Refinery to Vertex for $75M