Amgen Inc. (AMGN - Free Report) announced that it has entered into an agreement with Japanese pharmaceutical company Kyowa Kirin Co to jointly develop and commercialize KHK4083 for the treatment of atopic dermatitis (“AD”).

KHK4083 is a potential first-in-class anti-OX40 fully human monoclonal antibody which is being developed by Kyowa Kirin for AD and potential other autoimmune diseases.

Per the agreement, Amgen will be responsible for the manufacture and commercialization of KHK4083 throughout the world except in Japan, while Kyowa Kirin will retain all rights to KHK4083 in the country. Meanwhile, Kyowa Kirin will be eligible to receive an upfront payment of $400 million from Amgen and future contingent milestone payments worth up to an additional $850 million, as well as significant royalty payments on future global sales of the product, if approved.

Per the press release, Kyowa Kirin will co-promote KHK4083 with Amgen in the United States and will have opt-in rights to co-promote the candidate in ex-U.S. markets, including Europe and Asia.

Shares of Amgen have gained 3.5% so far this year against the industry’s decrease of 4.1%. 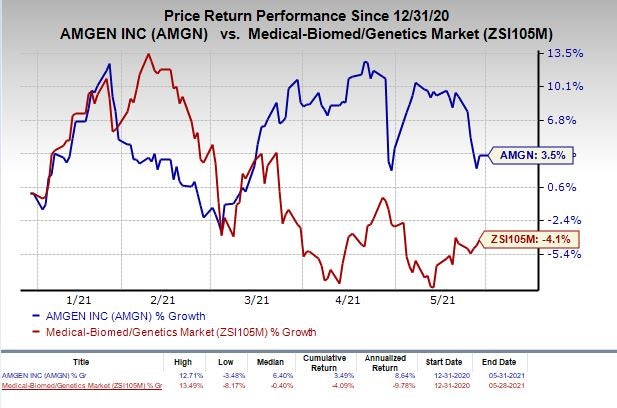 Notably, in February 2021, Kyowa Kirin announced that the double-blind and placebo-controlled phase II study, which evaluated KHK4083 for treating patients with moderate-to-severe AD, met its primary endpoint. The study was conducted in the United States, Canada, Germany and Japan.

Per the company, nearly 30 million people around the world are affected with moderate-to-severe AD. Hence, if successfully developed and upon potential approval, KHK4083 can help Amgen diversify its portfolio in treating inflammatory diseases.

Why Should You Add Marsh & McLennan (MMC) to Your Portfolio?