Equinor (EQNR) & Partners to Invest $8B in Offshore Brazil

Equinor ASA (EQNR - Free Report) recently announced the $8-billion final investment decision for phase one of the Bacalhau field in offshore Brazil. The development is located in the pre-salt Santos area of the South American country. The Brazilian regulatory authority approved the project in March.

The Bacalhau project is expected to be competitive, with breakeven cost likely to remain below $35 per barrel. As such, the project is expected to generate massive profits. Just from the first phase, estimated recoverable resources are more than 1 billion barrels of light crude oil. The development plan includes 19 subsea wells that will be tied back to a floating production, storage and offloading vessel. The unit is expected to produce 220,000 barrels of oil per day and have a storage capacity of 2 million barrels.

Equinor is currently the operator at the field, which was discovered in 2012, with a 40% stake. It has Exxon Mobil Corporation (XOM - Free Report) and PetrogalBrasil as partners with 40% and 20% interest, respectively. Drilling and well service contracts for the project were awarded to major companies like Schlumberger Limited (SLB - Free Report) , Baker Hughes Company (BKR - Free Report) and Halliburton Company.

Shares of the company have gained 49.7%, outperforming the industry’s 20.5% growth in the past year. It currently has a Zacks Rank #3 (Hold). You can see the complete list of today’s Zacks #1 Rank (Strong Buy) stocks here. 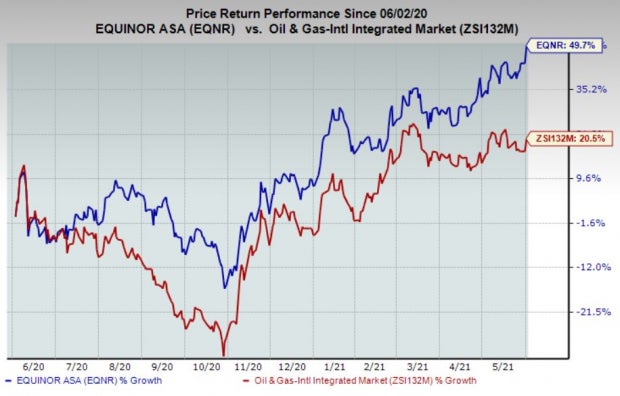