The tower sale is reportedly hailed as the biggest such deal by the Spanish company. This is expected to boost Telefonica’s business roadmap and enable it to tap lucrative market opportunities that will result in enhancing the competitiveness of its business units while capturing value from infrastructure assets through co-investments.

Consequently, it will also pave the path for generating higher revenues in the near future. The successful completion of the divestment in the Old Continent was followed by regulatory approvals in Spain and Germany. The deal was initially announced in mid-January when both the entities inked a definitive agreement to sell off Telxius’ tower assets in Europe and Latin America for a valuation of €7.7 billion euros ($9.41 billion) in cash.

As part of a broader deal to purchase more than 30,000 towers, the transaction is expected to benefit American Tower by generating $280 million in property revenues in 2021. At a time when majority of the European firms are aiming to consolidate their position in the market for aggressive 5G rollouts, Telefonica is taking a seemingly divergent path in a concerted effort to improve its liquidity.

Markedly, the recent deal will help in trimming its net debt by nearly €3.4 billion. Apart from accelerating Telefonica’s debt reduction, the acquisition will facilitate the Boston, MA-based company to grab significant scale in Europe and augment its Latin America presence.

The deal will drive American Tower’s long-term organic growth across both regions while enhancing the value of high-quality assets that are well located in strategic markets to deliver broadband connectivity to billions of people. In fact, the next stage of this transaction is estimated to take place in August.

Interestingly, the European tower transaction concurs with the completion of the momentous Liberty Global plc’s (LBTYA - Free Report) Virgin Media and Telefonica U.K.’s largest mobile network O2 merger deal. The 50:50 joint venture, valued at approximately £31.4 billion ($44.4 billion), including debt, is touted as a turning point in the history of the U.K.’s telecommunications industry.

The merger is expected to not only mark the launch of a strong mobile competitor in the U.K. market but also generate considerable synergies for Telefonica, with a net present value of £6.2 billion. Impressively, the closing of these two significant dealings is likely to cut down Telefonica Group’s net debt by about €9 billion while facilitating its efforts to upgrade its network to 5G.

Telefonica currently has a Zacks Rank #4 (Sell). Shares of the company have gained 5.9% compared with the industry’s growth of 6.7% in the past six months. 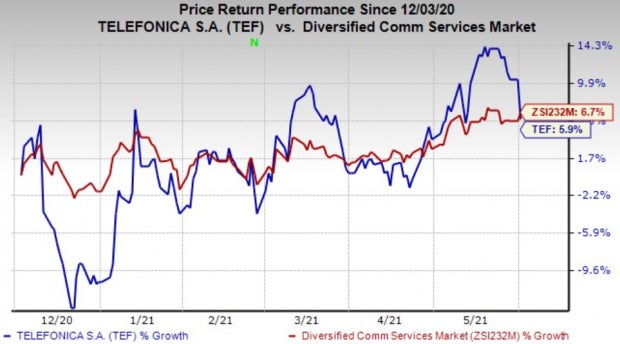 Vivendi has a long-term earnings growth expectation of 12.1%.