Shares of Saratoga Investment (SAR - Free Report) have rallied 3.2% since the dividend hike announcement last week. The company’s board of directors declared a quarterly cash dividend of 44 cents per share, marking a 2.3% increase from the prior payout. This dividend will be paid out on Jun 29 to shareholders of record as of Jun 15.

Christian L. Oberbeck, chairman and CEO of Saratoga Investment, said, “We are very pleased that our strong track record, healthy credit profile, robust deal pipeline, and ongoing asset growth continue to generate strong financial performance in support of a program of paying and increasing quarterly dividends.” He added, “Our dividend strategy is consistent with our overall approach to managing risk conservatively, while pursuing long-term growth and credit quality.”

Saratoga Investment has a track record of consistently increasing dividends. Prior to this, it hiked its dividend by 2.4% in March 2021.

Saratoga Investment’s shares have surged 17.3% over the past six months, underperforming the 19.5% rally of the industry it belongs to. 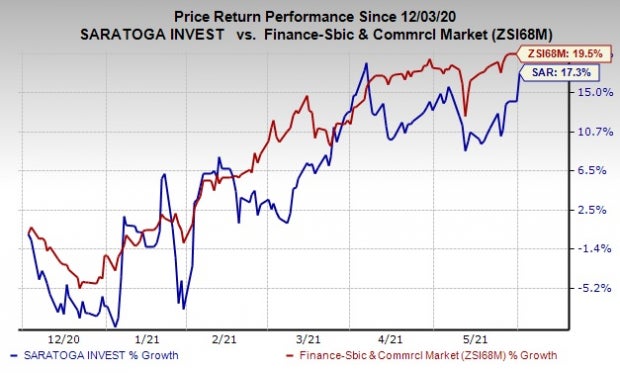 While it seems that Saratoga Investment stock is worth considering based on dividend income, investors interested in this Zacks Rank #3 (Hold) stock must take a look at its fundamentals and prospects before making any investment decision.

Earnings: Over the last three-five years, Saratoga Investment’s earnings witnessed growth of 5.6% against the industry’s average of 2% decline. This upward momentum is anticipated to continue in the near term, with earnings projected to grow at a rate of 4.5% and 3.3% in fiscal 2022 and fiscal 2023, respectively.

Also, the company has been witnessing upward earnings estimate revisions of late, indicating that analysts are optimistic regarding its earnings growth potential. The Zacks Consensus Estimate for both fiscal 2022 and fiscal 2023 earnings has moved marginally upward over the past 30 days.

Further, Saratoga Investment has an impressive earnings surprise history. Its earnings have surpassed the Zacks Consensus Estimate in three of the trailing four quarters, the average beat being 2.63%.

Revenues: Saratoga Investment’s revenues witnessed a compounded annual growth rate (CAGR) of 14.8% over the last five years (ending fiscal 2021). This upward momentum is anticipated to continue in the near term, with projected sales growth rate of 9.5% and 7.1% in fiscal 2022 and fiscal 2023, respectively.

Leverage: Saratoga Investment currently has a nil debt/equity ratio compared with the industry average of 0.69. This shows that the company is financially stable even in adverse economic conditions.

Valuation: Saratoga Investment stock currently seems undervalued when compared with the broader industry. It has a price/sales ratio of 4.96, below the industry average of 5.28. Also, its price-to-book ratio of 0.94 is lower than the industry’s 0.97.

Thus, based on the above-mentioned factors, the Saratoga Investment stock looks promising. However, one must take in to account a low rate environment, which is likely to hurt the company's financials in the near term. Also, the company does not reinvest its cash as efficiently as its peers. The company’s ROE of 7.63% compares unfavorably with the industry’s 8.90%.

Eagle Bancorp raised its quarterly dividend by 13.6%, while Ellington Financial increased its monthly common stock dividend by 40%. Alerus Financial has also announced a 6.7% hike in its dividend.