Eni SPA (E - Free Report) is planning to purchase oil and gas assets of BP plc (BP - Free Report) in Algeria as part of efforts to realign their businesses to address the burdensome debt plaguing the companies amid climate pressures, per Reuters.

Energy companies, which use carbon-intensive techniques for oil and gas exploration and production, are facing immense pressure from investors and activists to reduce emissions. Importantly, most companies believe that offloading carbon-intensive assets would result in actual emission cuts to meet the concerns regarding climate change.

As a result, both companies are considering the transfer of their assets through several options, including an outright sale and the possibility of providing BP an option to pick stakes in Eni’s assets around the world. Moreover, the companies are planning to form a joint venture in Algeria, similar to the one formed in May 2021 to combine their upstream portfolios into a new venture in Angola.

Per Reuters, the deal would help BP to dispose of its Algeria assets as the company has been trying to sell off assets since 2019. The company reported 6,000 barrels per day of liquid production and 141 million cubic feet of gas per day from Algeria in 2020.

Then again, Eni’s belongings in Algeria are far more significant. Notably, the company’s acquisition of BP’s assets is expected to turn Algeria into a hub.

The companies intend to transform their traditional oil and gas businesses into renewable energy, and low-carbon businesses in the coming decades. As part of the strategy, both companies plan to focus operations on the most profitable fields, such as the Gulf of Mexico for BP and Egypt’s giant offshore Zohr gas field for Eni.

Notably, Eni signed multiple share repurchase agreements with BP in Africa, which comprise divesting stakes in the Nour and Shorouk fields in Egypt. The multiple accords also include a significant commercial contract for LNG from Eni’s Coral South project in Mozambique.

Shares of the company have outperformed the industry in the past six months. Its shares have gained 23.3% compared with the industry’s 19.2% growth. 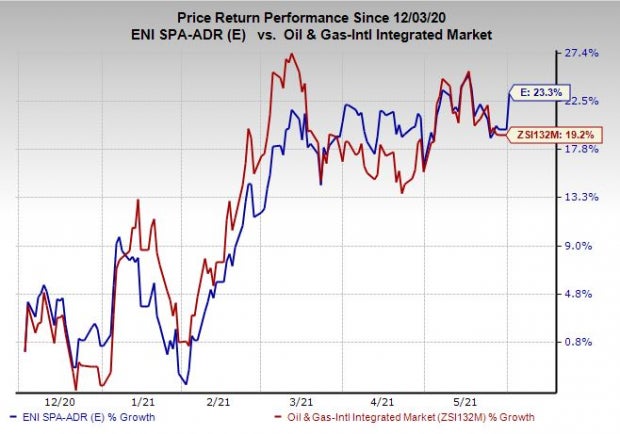 Over the past 60 days, the Zacks Consensus Estimate for Whiting Petroleum’s 2020 earnings has been raised by 153.3%.

Bonanza Creek’s earnings for 2021 are expected to rise 5.8% year over year.

6 Retail Stocks To Play the Reopening