Southwestern (SWN) to Acquire Indigo for $2.7B: Here's Why

Indigo’s net production stands at 1 billion cubic feet of natural gas per day (Bcf/d), which is expected to rise after the closing of the acquisition. The acquiree is a low-cost producer in the core of prolific Haynesville play. Its net adjusted debt stands at $631 million, with 1.1X leverage.

Total consideration of the $2.7-billion deal includes only $400 million in cash. The rest will be paid in around $1.6 billion in Southwestern’s common stock and $700 million in debt. Some analysts are wondering whether the company’s balance sheet can take the additional burden. As of Mar 31, 2021, its cash and cash equivalents were $4 million, while long-term debt was $2,812 million. The figure represents a debt to capitalization of 82.8%. However, the gains from the acquisition are too huge to overlook.

Southwestern already boasts a diversified reserve base in multiple U.S. basins and remains focused on investments in high-return areas such as Appalachia. The acquisition of Indigo further expands its reach in the Haynesville and Bossier shale plays of northern Louisiana. Indigo’s low-cost production structure will boost Southwestern’s profitability. Moreover, the acquirer is expected to get access to the premium Gulf Coast export market. The deal is likely to conclude in early fourth quarter.

Last August, Southwestern’s acquisition of Montage Resources boosted its Appalachian Basin footprint with high-return Marcellus and Utica assets, creating the third-largest producer in the basin, with net production of 3 billion cubic feet of natural gas equivalent per day (Bcfe/d). Acquiring Indigo assets will enable it to further ramp up net output to 4.1 Bcfe/d.

Therefore, rising production and commodity prices can fetch the company massive profits. The U.S. Energy Information Administration anticipates the Henry Hub spot price to average $3.05 per million British thermal units (MMBtu) in 2021 and $3.02 per MMBtu in 2022, indicating a significant increase from the 2020 average of $2.03. Increasing liquefied natural gas (LNG) exports and domestic demand will likely drive the prices. Demand for the commodity is likely to rise in commercial, industrial and residential places.

Southwestern stock has jumped 77.7% in the past year compared with 98.4% rise of the industry it belongs to. The company currently has a Zacks Rank #3 (Hold). You can see the complete list of today’s Zacks #1 Rank (Strong Buy) stocks here. 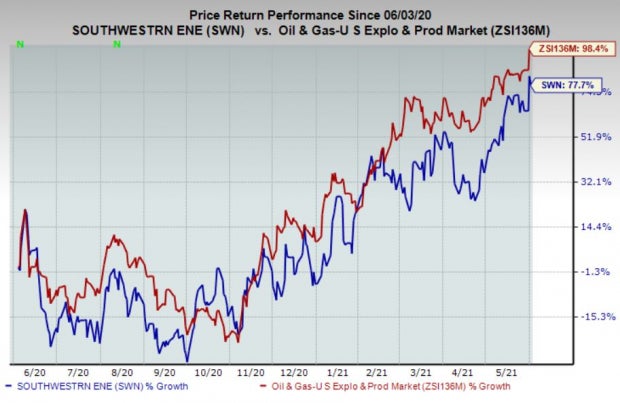