U.S. telecom stocks continued to witness a healthy uptrend over the past five trading days, largely buoyed by the optimism surrounding the proposed federal funds for domestic chip production. The bipartisan legislation is set to approve $52 billion for boosting production of semiconductor chips and R&D activities in the United States over the next five years. The bill made a significant headway in the Senate and is moving closer to the final vote. Industry observers feel that the federal funding could unlock private capital and benefit the overall sector, which possibly triggered the accretion over the past week.

The bill, dubbed the "U.S. Innovation and Competition Act", seeks to bring chip manufacturing back in the country. Various experts opine that this, in turn, could set the ball rolling for creating of about seven to 10 new chip manufacturing units with investments from states and private sector firms. Although it could take a bit of time for the investments to prove beneficial for the industry, the positive steps in this regard have seemingly infused confidence, boosting pent-up demand from the post-pandemic revival. However, some policymakers have cautioned that lack of adequate guardrails and screening procedures could divert these funds to firms backed by China and dilute the fundamental objective of the bill.

Meanwhile, two leading transportation advocacy groups — the Intelligent Transportation Society of America and the American Association of State Highway and Transportation — have legally challenged the FCC’s decision to offer a block of the 5.9 GHz spectrum band for wireless use. The spectrum earmarked for auto safety has mostly been unused and is now being considered to be made available to accommodate the increasing number of wireless devices. The FCC plans to transition the upper 30 MHz from the spectrum band for a different automotive communications technology called Cellular Vehicle-to-Everything, or C-V2X, and use the other 45 MHz for wireless use. The FCC, however, has declined to comment on the issue.

2.     Nokia Corporation (NOK - Free Report) has resolved a long-drawn patent licensing dispute with German automobile manufacturer Daimler AG. The move is likely to preempt a potential investigation by the European Commission on a Daimler complaint and probable consequent imposition of fine if Nokia was found to be at fault, thereby preventing legal hassles and bad publicity associated with it.

With the current truce agreement, Nokia will license its technology to Daimler for an undisclosed fee. All other pending litigations between the two firms, including that in EU, were amicably settled — the terms of which were not revealed to the public.

With the launch, Ericsson will be able to better address key trends in the enterprise cellular market. The company is focused on delivering the capabilities that are required by service providers for serving their business customers.

4.    In a concerted effort to streamline the communications infrastructure of the utility sector, Motorola Solutions, Inc. (MSI - Free Report) recently inked an agreement with Anterix Inc. As part of the collaboration, both the entities will be responsible for helping utilities and other critical-infrastructure companies to capitalize on private LTE networks. The private LTE networks will be deployed and be operational on Anterix’s licensed 900 MHz spectrum.

Markedly, the recent partnership is built on Motorola’s Private Broadband for Critical Infrastructure platform, which was announced last year. The announcement was further supported by a regulatory proceeding by the Federal Communications Commission to enable broadband deployment in the 900 MHz band, driven by enhanced network capacity.

As part of this mission, MAS has been equipped with Thales VesseLINK 700 terminal. It is powered by Iridium Certus, an L-band broadband solution that offers enhanced global coverage. As a result, the AI-enabled marine research vessel will be able to assimilate essential science and environmental data, provide performance feedback and track location, all in real time. 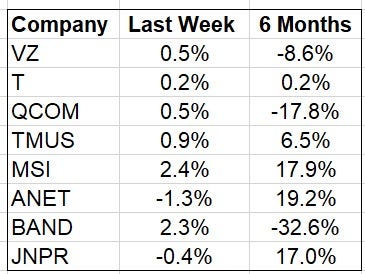 In the past five trading days, Motorola has been the best performer with its stock gaining 2.4%, while Arista declined the most with its stock falling 1.3%.

Over the past six months, Arista has been the best performer with its stock appreciating 19.2%, while Bandwidth declined the most with its stock falling 32.6%.

Over the past six months, the Zacks Telecommunications Services industry has gained 10.1% while the S&P 500 has rallied 14.1%. 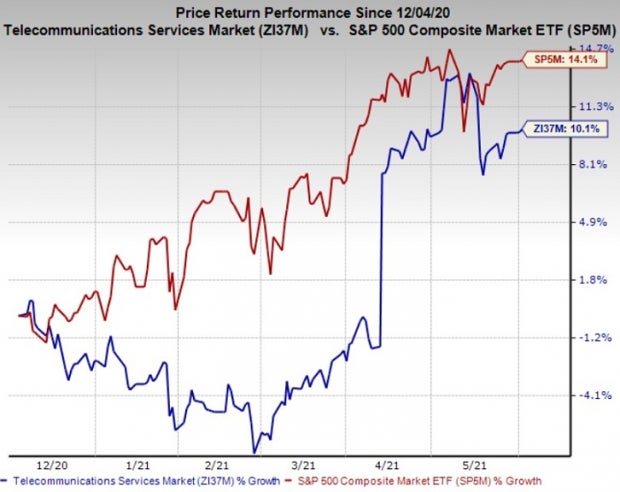