With this, PSEG Power is likely to have retired more than 2,400 MW of coal-fired generation since 2017.

As part of this pledge, in 2019, PSEG Power sold its interest in the Keystone and Conemaugh coal plants in western Pennsylvania. The latest retirement of Bridgeport Harbor Station has also been guided by this net-zero carbon emission target of PSEG.

Notably, apart from retiring its coal generation units, the company is expanding its footprint in the renewables market by acquiring new renewable assets and undertaking related initiatives.

Notably, in December 2020, PSEG joined forces with Ørsted North America to acquire a 25% equity interest in Ørsted’s Ocean Wind project, which boasts the capacity to deliver 1,100 megawatts of clean energy and could provide first power in late 2024.

Moreover, the company has adopted two solar initiatives, the Solar Loan program and the Solar 4 All programs, which support New Jersey’s Energy Master Plan and the state’s renewable energy goals.

Realizing the need and advantage of the rapid shift toward clean energy, utilities across the board are enhancing their renewable portfolio and reducing fossil fuel dependence at a faster pace.

In a year’s time, shares of the company have increased 18.7% compared with the industry’s 4.6% growth. 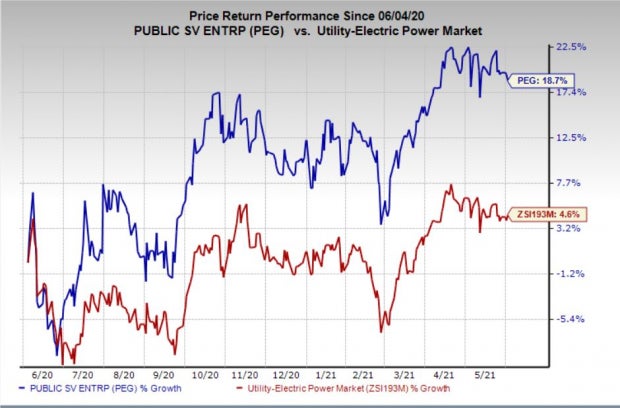