In the past three months, shares of this Zacks Rank #3 (Hold) company have increased 3.6% against the industry’s decline of 2.7%.

Lands' End posted earnings of 8 cents a share that beat the Zacks Consensus Estimate of a loss of 27 cents. In the year-ago quarter, the company had reported a loss of 64 cents.

The company generated net revenues of $321.3 million that beat the Zacks Consensus Estimate of $283.2 million. The top line surged 48.1% year on year and increased 22.4% from first-quarter fiscal 2019 levels. Management highlighted that a strong underlying business supported the quarter’s performance, as it continued to emerge from the impacts of the pandemic. Additionally, strength across a number of key categories including swimwear, sleepwear and knits as well as prudent marketing strategies acted as upsides. 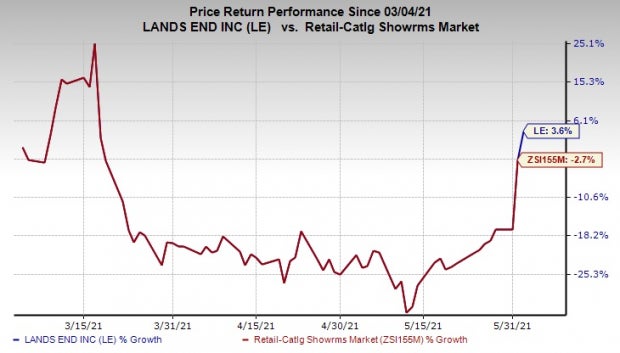 An Insight Into Margins

Gross profit increased 56.8% year over year to $147.7 million. Also, gross margin expanded 260 basis points (bps) to 46%. The upside was driven by merchandise margin expansion in the U.S. e-commerce channel driven by improved promotional strategies and persistent use of data analytics, partially offset by increased shipping costs and surcharges as well as higher sales mix from the lower-margin Third Party channel.

Further, selling and administrative (S&A) expenses increased 18.6% to $125.5 million. S&A expenses, as a rate of sales, fell 970 bps to 39.1% on leverage from higher sales. This was partially offset by increased digital marketing expenses.

Meanwhile, adjusted EBITDA amounted to $22.5 million, reflecting an improvement of $34.1 million from a loss of $11.6 million in the year-ago period.  This was primarily driven by higher sales, gross margin expansion and prudent cost-controlling actions.

Lands' End ended the quarter with cash and cash equivalents of $36.2 million, net long-term debt of $242.8 million and total stockholders’ equity of $370.2 million. Further, inventories at the end of the quarter were $394.3 million.

At the end of the quarter, net cash used in operations amounted to $38.7 million. For fiscal 2021, the company expects capital expenditures worth approximately $26 million.

Management is confident about attaining its long-term growth targets, backed by strong growth witnessed in the company’s e-commerce platform, faster than expected recovery of its Outfitters business and a data-driven approach toward business fundamentals.

For second-quarter fiscal 2021, the company projects net revenues of $345-$355 million. In the year-ago quarter, the company posted revenues of $312 million. Further, adjusted EBITDA is envisioned in the band of $20-$23 million. The company forecasts earnings in the range of 5-12 cents per share. In the prior-year quarter, the company reported earnings of 13 cents per share.  We note that the Zacks Consensus Estimate for second-quarter revenues is pegged at $329.2 million, while the consensus mark for the bottom line is pegged at a loss of 14 cents.

For fiscal 2021, management now expects net revenues in the bracket of $1.61-$1.65 billion compared with the prior expectation of $1.52-$1.57 billion. In fiscal 2020, the company’s top line amounted to $1.43 billion. Further, adjusted EBITDA is projected in the range of $114-$122 million compared with earlier guidance of $88-$98 million. Earnings per share are expected between 84 cents and $1.04 compared with earnings in the range of 34-58 cents anticipated earlier. In fiscal 2020, the company posted earnings of 33 cents. The Zacks Consensus Estimate for revenues and earnings is pegged at $1.61 billion and 49 cents, respectively, for fiscal 2021.