The J. M. Smucker Company (SJM - Free Report) posted results for fourth-quarter fiscal 2021, with the top and the bottom line beating the Zacks Consensus Estimate. However, net sales and earnings declined year over year. Weakness in U.S. Retail Pet Foods, U.S. Retail Consumer Foods and International and Away From Home led to the downside.

Adjusted earnings of $1.89 per share fell 26% year over year. Nevertheless, the metric surpassed the Zacks Consensus Estimate of $1.68.

Net sales amounted to $1,920.2 million, which beat the consensus mark of $1,874 million. However, the top line declined 8% year over year. Excluding non-comparable sales of the divested Crisco and Natural Balance businesses along with removing the impact of favorable currency movements, net sales fell 3%. The downside can be attributed to lapping of consumer stock-up purchasing amid the pandemic in the year-ago quarter. This was somewhat offset by escalated at-home consumption trend. Notably, decline in comparable net sales was mainly caused by a 4 percentage point decline in volume/mix in the company’s U.S. Retail Pet Food segment and International operating unit. Nevertheless, favorable net price realization to the tune of 1 percentage point mostly driven by the U.S. Retail Consumer Foods and U.S. Retail Pet Food units offered some respite.

Adjusted gross profit declined 10% to $727 million. Further, adjusted gross profit margin declined to 37.9% from 38.5% reported in the year-ago quarter. Adjusted operating income declined 28% to $311.6 million. Adjusted operating margin came in at 16.2%, down from 20.6% reported in the year-ago quarter. Notably, total selling, distribution and administrative expenses increased to $411.1 million from $373.4 million posted in the prior-year quarter.

U.S. Retail Consumer Foods: Sales in the segment fell 13% to $419.8 million. Excluding the impact of the divested Crisco business, net sales inched up 1%. Net price realization contributed 4 percentage points to sales stemming mainly from impacts of a peanut butter list price increase carried out in the second quarter. That being said, volume/mix declined net sales by 3 percentage points thanks to soft demand for Smucker's fruit spreads and Jif peanut butter. These were somewhat countered by growth in Smucker's Uncrustables frozen sandwiches. Segment profit slumped 29% to $94.8 million mainly due to higher marketing investments and costs among other reasons.

International and Away From Home: Net sales decreased 7% to $242.7 million. Excluding the impact of the Crisco divestment, net sales fell 5% mainly due to 15% decline in the company’s International operating division. This was partly made up by 7% sales growth in Away From Home division. Combined volume/mix for businesses decreased net sales by 9 percentage points while net price realization was neutral. Further, foreign currency movements were favorable by 3 percentage points. Segment profit declined 30% to 29.2 million due to adverse volume/mix. 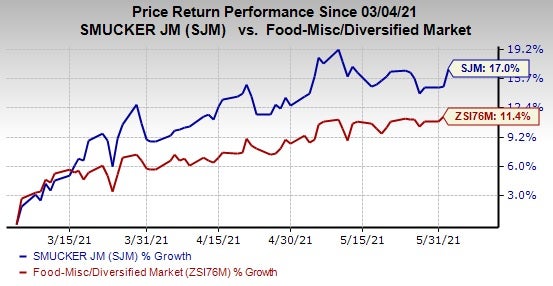 The company’s net debt repayments amounted to $84 million in the fourth quarter. Apart from this, The J. M. Smucker repurchased 1.3 million shares worth $150 million in the same time period.

The J. M. Smucker expects net sales decline of 2-3% year over year. The projection included impact of $355.6 million associated with Crisco and Natural Balance divestiture. On a comparable basis, net sales are anticipated to increase nearly 2% at the mid-point of the net sales guidance range. This takes into account improved net pricing in various categories and persistent double-digit net sales growth in the Smucker's Uncrustables brand coupled with rebound in away from home channels. These are likely to be somewhat offset by softness in at-home consumption trends.

Management expects the pandemic to continue impacting its results in fiscal 2022. Apart from this, volatile consumer behavior, retailer inventory levels, any manufacturing or supply-chain hurdles, and macroeconomic factors can affect The J. M. Smucker’s performance this year.

Shares of this Zacks Rank #3 (Hold) company have gained 17% in the past three months compared with the industry’s growth of 11.4%.