Continuing with its efforts to expand operations in China, JPMorgan (JPM - Free Report) applies to obtain a 100% stake in its China securities joint venture (“JV”). Along with this, the U.S. banking giant is increasing staffing in the nation, per Bloomberg.

Mark Leung, JPMorgan’s chief executive officer for China said in a Bloomberg interview that the bank has entered commercial agreements with existing partners in its securities and asset management joint ventures. Also, the bank is increasing its staffing 16-17% a year.

Notably, in November 2020, JPMorgan already raised its stake in the China securities venture to 71%. It came after the company completed the transaction to buy a 20% stake in the JV from one of the local partners — Shanghai Waigaoqiao FTZ — for 177.7 million yuan ($26 million).

As China’s $53-trillion financial market is now open to foreign firms, following the removal of restrictions on ownership, the biggest U.S. bank (in terms of assets) like other global firms is rushing to capitalize on the opportunity.

In fact, JPMorgan has decided to get full ownership of all of its mainland China operations by the end of this year, which is part of its four-year investment plan in the country.

The Wall Street giant has already obtained full control of its futures JV in China, J.P.Morgan Futures Co., after receiving regulatory approval from the China Securities Regulatory Commission to increase the stake to 100% from 49%.

Like JPMorgan, Goldman Sachs (GS - Free Report) has also begun the process of receiving clearance from regulators for obtaining full control of its securities JV in China. The company is on a hiring spree in China and Hong Kong, and is mulling to recruit more than 400 people in the regions. The bank is said to be in the process of filling 320 positions, which includes 70 positions in its investment bank. It also intends on adding another 100 positions by the end of this year.

Goldman Sachs’ plan to boost its Hong Kong and China operations follows other lenders’ moves, who are hiring in the region too, in anticipation of a continued ‘homecoming’ of U.S.-listed China firms pursuing secondary listing in Hong Kong.

This March, Citigroup (C - Free Report) was in the news for plans of recruiting nearly 1,700 people in Hong Kong. Likewise, Credit Suisse Group (CS - Free Report) aims to triple its headcount in China over the next three years by taking full control of its mainland securities JV and strengthening business in the nation.

JPMorgan’s initiatives to expand branch network in new markets are expected to continue supporting profitability. Its inorganic expansion strategy along with a strong mortgage banking business is likely to aid growth.

So far this year, shares of JPMorgan have gained 30.6% compared with 35.5% growth recorded by the industry. 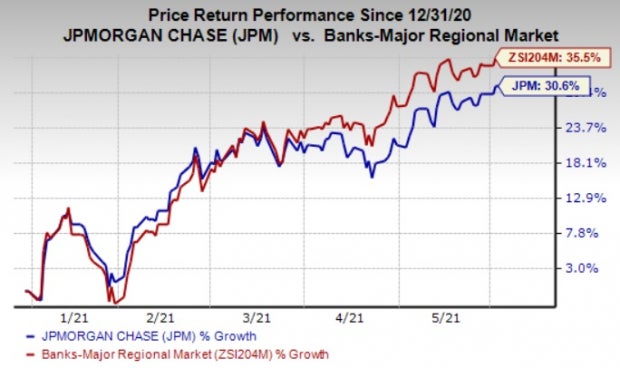