In an effort to expand its wealth-management offerings globally, Citigroup Inc. (C - Free Report) has commenced hiring financial advisers. With the bank’s focus on the world’s wealthiest individuals, this move is likely to further improve profitability.

At Bernstein Strategic Decisions Conference Jane Fraser, the CEO of Citigroup, noted “It’s a business where a lot of money is given out in compensation models. If you have a superb value proposition and an incredible platform, you’re able to give more of that money back to shareholders as you divide the pie up.”

Citigroup is focused on simplifying its business lines. The company plans to provide wealth management services to the clients who already use its commercial banking products.

Moreover, management is focused on building a series of wealth hubs in Asia and Europe, while retreating from retail operations in 13 countries across this region. Also, earlier this year, Citigroup created a new wealth unit by combining its private-banking arm with the bank’s wealth management offerings.

Fraser further added, “So I’m not trying to push my own products at the clients to maximize manufacturing revenue. I’m just trying to serve the clients well.”

With no asset management business of its own, Fraser believes the bank is at an advantageous position as the wealth managers will likely not have any incentive to sell its own financial products. She also believes that a year from now, the company will have a “more fleshed-out” strategic restructuring.

Citigroup’s hiring plans to drive the expansion of its wealth management business will likely bolster profitability. Further, this effort is likely to offset the adverse impact of the consumer banking business’ muted performance.

Shares of Citigroup have gained 36.2% in the past six months compared with the industry’s rally of 40.7%. 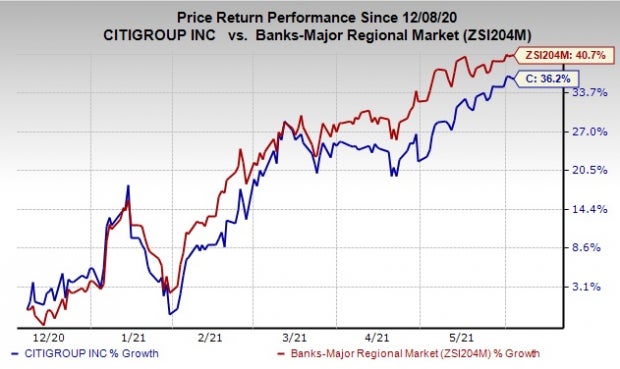 HSBC has planned to hire more than 1,000 managers in its wealth management business in Asia by the end of this year. Credit Suisse also aims to triple its headcount in China over the next three years by taking full control of the bank’s mainland securities joint venture and strengthening the business in the nation. Additionally, Goldman Sachs is mulling to recruit more than 400 people in mainland China and Hong Kong.