Moreover, the alliance is expected to boost Viasat’s in-flight connectivity segment and enable it to tap lucrative business opportunities, thereby strengthening its market penetration across various territories. Per the deal, Viasat will capitalize on Avanti’s satellites for the growth of its global mobility and enterprise businesses, particularly across energy, aviation and maritime. Following the announcement of the news, shares of the Carlsbad, CA-based company have gained 1.5% to close at $54.76 on Jun 4.

With more than a decade of industry experience, Avanti holds a robust network of ground stations and satellites that facilitate security forces and mobile operators to function under challenging conditions with enhanced coverage. With its operations across 118 countries, the British entity is touted as the leading EMEA Ka-band high throughput satellite capacity partner. It has made significant investments in ensuring a resilient ground network and boasts a fleet of five satellite constellation with 50 GHz of Ka-band high-throughput capacity.

Interestingly, Viasat and Avanti have been sharing an active working relationship for quite some time now, thanks to their previous Ka-band capacity lease agreements. This extended partnership is likely to increase Viasat’s addressable market with new customers, supported by the flexibility of Avanti’s network. Although financial terms of the deal were not disclosed, the communications equipment developer intends to utilize Avanti's HYLAS 4 and HYLAS 2 satellites from October 2021.

Apart from the recent Ka-band capacity lease contract, Viasat is ramping up investments in the development of its revolutionary ViaSat-3 broadband communications platform, which will have nearly 10 times the bandwidth capacity of ViaSat-2. The ViaSat-3 platform will help to form a global broadband network with sufficient network capacity to allow better consumer choices with an affordable, high-quality, high-speed Internet and video streaming service.

Recently, the company completed payload integration for ViaSat-3 (Americas) and is currently focused on construction of the payloads for ViaSat-3 (Europe, Middle East, and Africa) and ViaSat-3 (Asia-Pacific). Though certain coronavirus-induced disruptions pose risk to the payload completion and the final spacecraft assembly, integration and test schedule, Viasat expects to launch the first ViaSat-3 class satellite in early 2022.

In addition, Viasat has garnered enough economics of scale and scope to serve vast emerging markets in South America, Africa, Middle East and Western Asia. Hence, the strategically planned ViaSat-3 satellites are likely to provide the company with a solid competitive edge over its peers, thereby bolstering growth in long run. 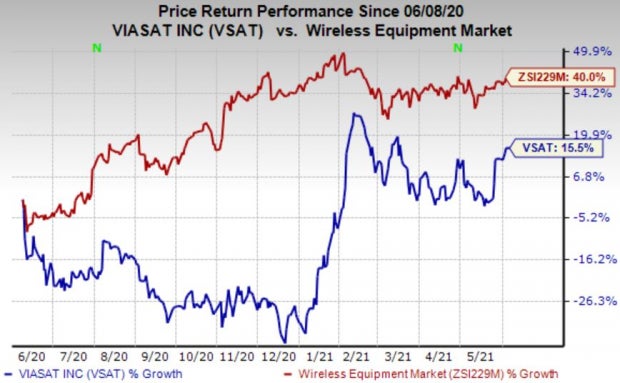