General Dynamics Corp.’s (GD - Free Report) business unit, NASSCO, recently secured a $98.7-million contract for the modernization of the USS Pinckney (DDG 91) Arleigh Burke-class missile destroyer. The contract was awarded by the Naval Sea Systems Command, Washington, D.C.. Work related to the deal will be performed in San Diego, CA, and is scheduled to be completed by July 2023. If additional options of the contract are exercised by both parties, the entire value of the same could reach $121.1 million.

Being one of the largest military shipbuilding manufacturers in the United States, General Dynamics enjoys a dominant position in the global naval shipbuilding market. The DDG 91 ships have gained widespread importance within the U.S. Naval forces, as these warships are equipped with Lockheed Martin’s (LMT - Free Report) Aegis Weapon System, a highly integrated naval weapon system. These missile destroyers also contain SH-60 Seahawk helicopters, and advanced anti-aircraft and land-attack missiles.

With growing demand for this warship, General Dynamics is witnessing a steady flow of contracts. Alongside General Dynamics, Huntington Ingalls (HII - Free Report) , the largest military shipbuilding company in the United States, manufactures the DDG 91 Arleigh Burke-Class destroyer ship for the U.S. Navy.

Notably, the DDG 91 Arleigh Burke-class missile destroyers’ importance continues to grow as these ships offer a wide range of advanced warfighting capabilities in multi-threat air, surface and subsurface environments.  It also offers protection against a wide range of threats, including ballistic missiles.

Per a report released by the U.S. Department of Defense, the fiscal 2022 defense budget includes a spending provision of $34.6 billion on combat-effective naval forces, higher than fiscal 2021’s allotted budget of $32.3 billion. The allotted budget specifically includes the requirement of one Arleigh Burke Destroyer. Such favorable budgetary projections bode well for major shipbuilders like General Dynamics, as it increases the company’s possibility of winning more shipbuilding and associated contracts.

Further, looking ahead, the global naval shipbuilding market is expected to grow by $14.36 billion during the 2020-2024 period at a CAGR of 3%, as estimated by a Technavio report. Notably, other players in the same industry, such as Mitsubishi Heavy Industries, Ltd. (MHVYF - Free Report) , alongside General Dynamics and Huntington Ingalls, should potentially benefit from the projected growth of the naval shipbuilding market.

General Dynamics has been serving the U.S. Navy by constructing and delivering next-generation combat ships for decades. Being one of the Navy's primary surface combatants, the DDG 91 destroyers enjoy solid demand. Such steep demand places General Dynamics at an advantageous position in the shipbuilding business.

Shares of General Dynamics have gained 15.3% in a year compared with the industry’s growth of 3.7%. 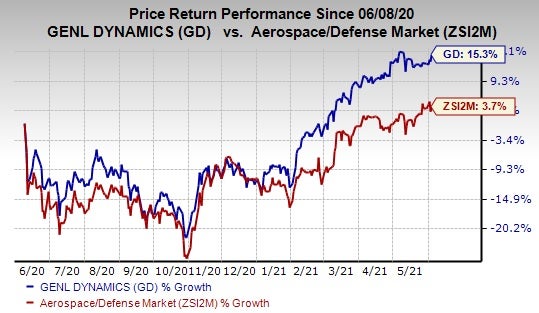