The divestment is expected to bring a whopping C$1.14 billion (around $943 million) in cash for Enbridge. Importantly, the transaction amount denotes a 29X valuation of GAAP earnings of $39 million in 2020.

The Calgary, Canada-based company owns a 38.9% interest in Noverco, which is part of the gas and power distribution business, while the remaining is held by Trencap. The deal is expected to be closed in the beginning of the next year, following which Trencap will be the sole owner of Noverco, which primarily operates in Quebec and Vermont.

Enbridge intends to use the cash proceeds from the sale to repay short-term debt. At the end of first-quarter 2021, the company reported a long-term debt of C$62,688 million, and cash and cash equivalents of only C$465 million. The current portion of long-term debt was C$4,014 million.

Enbridge — which generated a profit of C$646 million from the gas distribution and storage business in first-quarter 2021 — has plans to keep debt levels at 4.5-5X of EBITDA as well as boost dividends. Moreover, the company estimates $10-billion growth capital projects to be placed into service in 2021. From 2021 to 2023, the midstream player expects $17 billion in growth capital projects to be executed, which will likely drive 4-5% distributable cash flow per share growth through 2023.

Enbridge’s shares have gained 16.5% in the past year compared with 17.9% growth of the industry it belongs to. 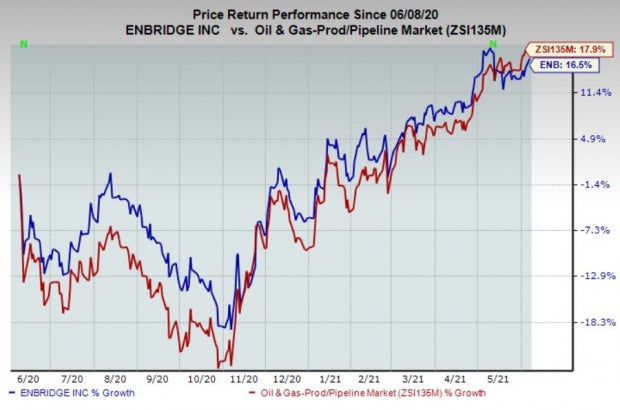