Eni SPA (E - Free Report) recently announced that it has succeeded in drilling and testing the Maha 2 appraisal well, offshore Indonesia. The well is located in the West Ganal block in Kalimantan, 16 kilometers southeast of the famous Jangkrik FPU.

The drilling took place at a water depth of 1,115 meters. The well is expected to be 2,970 meters deep. Eni uncovered 43 meters of gas-bearing net sands from the Pliocene geological period at the site. Notably, the production test yielded flow rates of up to 34 million cubic feet of natural gas per day. The company intends to further drill two appraisal wells in the region. The project is expected to support Indonesia’s increasing domestic energy market and growing exports.

The data gathered from the tests will be used to formulate a field development plan, which might include a sub-sea completion. Moreover, the deep-water Maha site can be tied-in to Jangkrik FPU, which will enable the leading integrated energy player to maximize synergies. Also, the proximity of the field to the existing infrastructure is expected to decrease time and costs required for future subsea developments at the site.

In East Kalimantan, Eni already has two major producing projects, namely, Jangkrik and Merakes. The company is operating in Indonesia for two decades and generates equity production volume of around 80,000 barrels of oil equivalent per day at present. Eni’s constant efforts to expand upstream operations will go a long way in generating growth. Key upstream projects like deep-water Maha are expected to enable the company to achieve a compound annual growth rate of 4% from 2021 through 2024.

Eni, with a 40% stake, is the operator of the West Ganal Block. Neptune West Ganal B.V. and P.T. Pertamina Hulu West Ganal are the other stakeholders, with 30% each.

Eni’s shares have increased 14.5% in the past year compared with 8.1% rise of the industry. 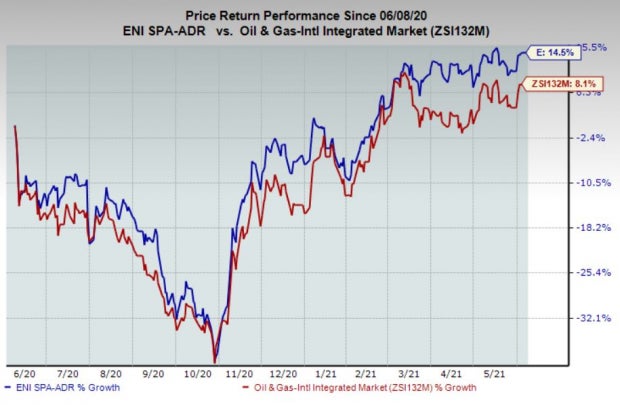