Lockheed Martin Corp. (LMT - Free Report) recently secured a contract, under which it will provide logistics support for Space Based Infrared Surveillance. The contract was awarded by the Missile Systems Center, Peterson AFB, CO.

Valued at $1 billion, the contract is expected to get completed by Jul 1, 2026. The entire task will be executed in multiple locations across the state of Colorado.

Space Based Infrared Systems (SBIRS) uses infrared surveillance to provide enhanced missile warning capabilities for the U.S. military and is considered one of the nation’s highest priority space programs.

Built in about five years, SBIRS GEO-5 is the first military space satellite built on an LM 2100 Combat Bus, a version of Lockheed Martin's modernized, modular LM 2100 space vehicle with greatly enhanced resiliency. Such innovations surely elevate Lockheed’s position in the missile defense market, with this defense major being the SBIRS prime contractor, while Northrop Grumman (NOC - Free Report) is the payload integrator.

While such missiles aid in counter-attacking incoming missile threats to a nation, significant missile warning capabilities like SBIRS form an integral portion of a nation’s defense strategy, helping in prevention of casualties.

Cross-border conflicts between nations along with spurring intra-state disputes have resulted in civil wars like the ones going on in the Middle East. Therefore, the boom in the missile defense market  is expected to continue over the next few years. Anticipating this trend, missiles and missile defense systems market is estimated to register a CAGR of over 10% during 2020-2025 period, as predicted by Mordor Intelligence.

This should usher in frequent contract wins, like the latest one, for prominent U.S. missile makers like Lockheed, Raytheon Technologies (RTX - Free Report) and Boeing (BA - Free Report) , with North America generating the highest revenues.

Shares of Lockheed Martin have lost 5.5% in a year against the industry’s growth of 3.7%. 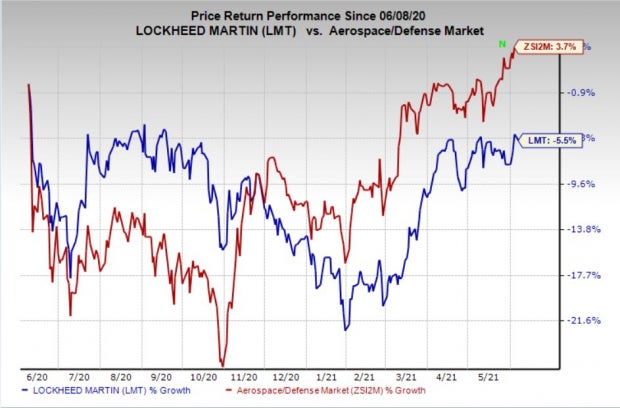