Like many other utility providers, Duke Energy is aggressively investing in solar energy to enhance its renewable asset base. Notably, during 2020, Duke Energy connected nearly 350 megawatts (MWs) of solar power in its North Carolina regulated utilities. In Florida, the company is investing nearly $1 billion in solar projects to bring 700 MW of solar online through 2022.

Moreover, Duke Energy has received approval for its $1 billion Clean Energy Connection shared solar program in Florida, which will add another 750 MWs of solar by the end of 2024. In battery storage, the company aims to invest $600 million during 2021-2025 period and also projects more than 13,000 MWs of energy storage on its system by 2050.

These initiatives are expected to enable the company to duly achieve the target of doubling its enterprise-wide renewable portfolio from 8 GW to 16 GW by the end of 2025. The Pisgah Ridge Solar project, once completed, will put Duke Energy a step ahead toward achieving this target.

Overcoming the COVID-19 challenges, the solar market in the United States is gradually rallying back on a solid growth trajectory. Looking ahead, per the latest report by Solar Energy Industries Association (SEIA), Wood Mackenzie forecasts that the total operating solar fleet in the United States will more than quadruple by 2030 with utility-scale solar pipeline playing the role of a major catalyst.

Notably, Dominion Energy currently plans for a significant expansion of large-scale solar energy in Virginia, wherein at least 15,900 MW of new solar energy could be added in the next 15 years. On the other hand, CMS Energy’s clean energy plans include adding approximately 1,100 MW of solar through 2024 to help achieve net-zero carbon emissions by 2040.

In a year’s time, shares of Duke Energy have increased 10.8% compared with the industry’s 0.1% growth. 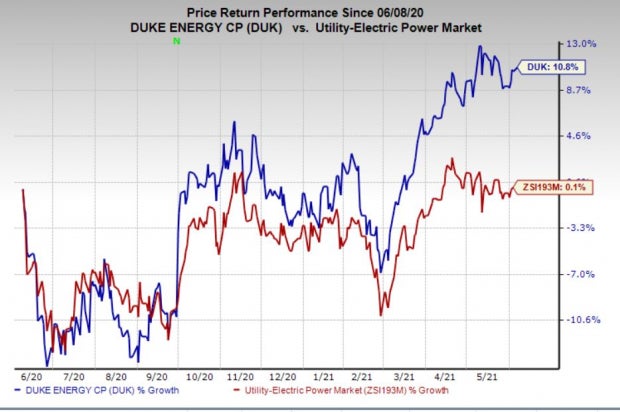